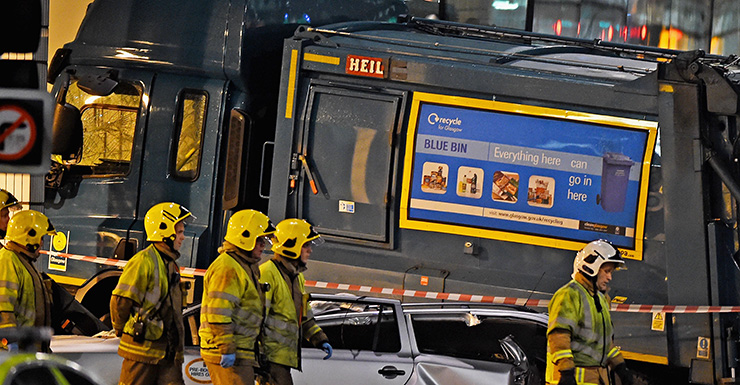 Six people were killed and at least seven others injured in Glasgow on Monday when a bin lorry ploughed into crowds of Christmas shoppers in what appeared to be a tragic accident.

One eyewitness described the vehicle knocking people down “like pinballs” as it veered out of control over a distance of around 300 metres, only stopping when it crashed into a hotel.

“Sadly six people have died as a result of the George Square major road incident,” read a tweet on the Scottish police force’s official account.

• Memorial flowers to be removed
• Cairns house will be demolished

Emergency services cordoned off the normally bustling area in what is Scotland’s biggest city.

Police superintendent Stewart Carle told reporters at the scene that people were killed over “a number of sites”.

He said that the driver, who was reported by some British media as having suffered a heart attack, was being treated in hospital.

“The (truck) just lost control. It went along the pavement, knocking everyone like pinballs,” eyewitness Melanie Greg told Sky News.

She added: “There was noise, bangs, screams and everything. It was just horrific.”

The rubbish truck, owned by Glasgow City Council, mounted the pavement and hit the first pedestrian outside the Gallery of Modern Art on Queen Street at about 2.30pm, police said.

It struck several more as it continued at speed for another two blocks, crashing at the Millennium Hotel on George Square, near Queen Street station.

Scottish police said there was nothing “sinister” about the Glasgow incident, calling it an accident.

“It is a road traffic collision with multiple fatalities,” Carle said, adding: “It does not look to be a criminal or deliberate attack.”

Prime Minister David Cameron said he was being kept informed of developments.