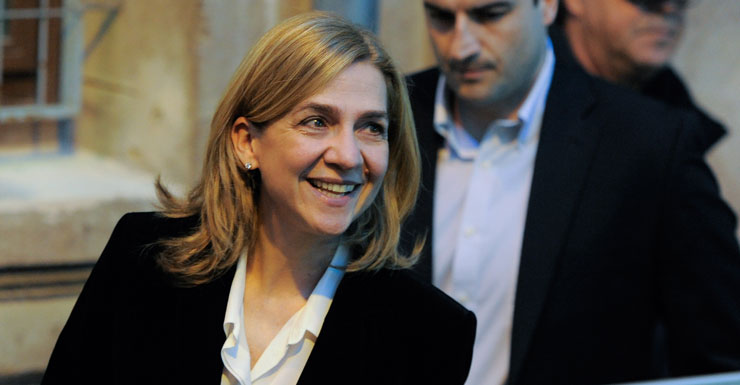 The sister of Spain’s King Felipe VI, Cristina, will become the first member of the royal family ever to stand in the dock after a judge ordered her to be put on trial for alleged tax fraud.

The historic decision stemmed from four years of investigations that plunged the royal family into crisis and contributed to the abdication of King Juan Carlos in June.

A court on the island of Majorca ordered Cristina, 49, to stand trial on two counts of accessory to tax fraud in connection with her husband’s business affairs.

She is accused of cooperating in tax evasion by her husband, the former Olympic handball player Inaki Urdangarin. He is accused of embezzling and laundering millions of euros in public funds.

Cristina’s lawyers say she is innocent of any wrongdoing.

Cristina Federica de Borbon y Grecia is the youngest daughter of Juan Carlos and sixth in line to the throne. She married Urdangarin in 1997 in a glittering ceremony in Barcelona.

The case is a big headache for Felipe who took the throne on June 19 promising an “honest and transparent monarchy”.

Public prosecutors had called on the court to shelve the case, saying there was a lack of evidence against Cristina and hinting that investigators were out to get the princess.

As well as Cristina and Urdangarin, the court on Monday ordered 15 other suspects to stand trial.

Urdangarin is accused along with a former business partner of creaming off six million euros ($A8.66 million) in public funds from contracts awarded to Noos, a charitable foundation.

Cristina sat on the board of Noos and Urdangarin was its chairman.

Investigators suspect that a separate company jointly owned by the couple, Aizoon, served as a front for laundering embezzled money.

Questioned in court by Castro in February, Cristina said she had simply trusted her husband and had no knowledge of his business affairs.

A mother of four with a master’s degree from New York University, Cristina was once considered untouchable as a member of the royal family.

But the so-called Noos affair fanned public anger against the monarchy and the ruling class during the recent years of economic hardship in Spain.

The scandal soured the reign of Felipe’s father Juan Carlos, who gave up the throne after 39 years so his son could freshen up the image of the monarchy.

Investigations into the Noos affair were launched in 2010. Urdangarin and Cristina have been excluded from royal activities since 2011 when he was first named as a suspect in the probe.