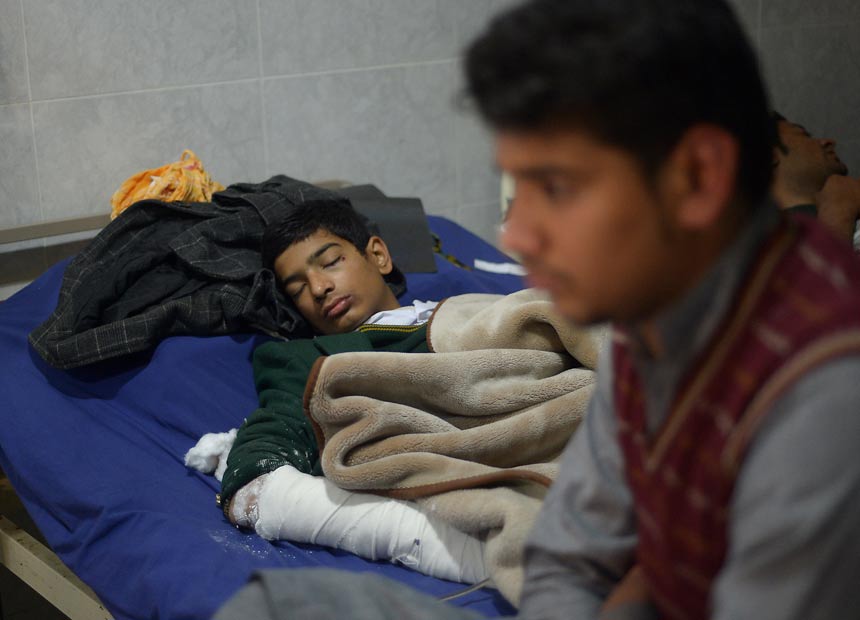 A young man shot by Taliban militants has detailed how he survived the horrific attack on a Pakistani school by ‘playing dead’.

Khan, a 16-year-old student at Peshawar’s Army Public School, has recalled how he cowered beneath a bench after being shot in the legs, stuffing his school tie in his mouth to keep from screaming.

“I saw a pair of big black boots coming towards me,” Khan told the The Independent UK.

“‘I folded my tie and pushed it into my mouth so that I wouldn’t scream. The man with big boots kept on looking for students and pumping bullets into their bodies.

“I lay as still as I could and closed my eyes, waiting to get shot again.”

“I was sitting in my class when I heard firing outside. Our teacher first told us that some kind of drill was going on and that we do not need to worry,” he told The Independent.

“Then the sound came closer. Then we heard cries. One of our friends opened the window. He started crying as there were several schoolfellows lying on the ground outside the class. Everybody was in panic. Two of our class fellows ran outside in panic. They were shot in front of us.”

The horrific attack, which began early on Tuesday when soldiers stormed the school shooting at random, killed at least 132 schoolchildren aged 10 to 18.

The Taliban has officially claimed responsibility for the attack, calling it an act of revenge for an anti-terrorist military offensive.

The militant group said it was “just a trailer” for further attacks to come.

The news from Pakistan is deeply shocking. It’s horrifying that children are being killed simply for going to school.

Upon hearing of the attack Tuesday, Greg Mortenson, the founder of the Central Asia Institute – an organisation set up to educate children in Pakistan and Afghanistan – released a statement about the power of education.

“Ultimately, this assault shows that the militant’s greatest fear is not bullets, but pens and literacy,” Mr Mortenson said in a written statement on the CAI’s Facebook page.

“Our hearts break with news of massacre at a school in Peshawar, Pakistan. ‘The smallest coffins are the heaviest,’ one person said.”