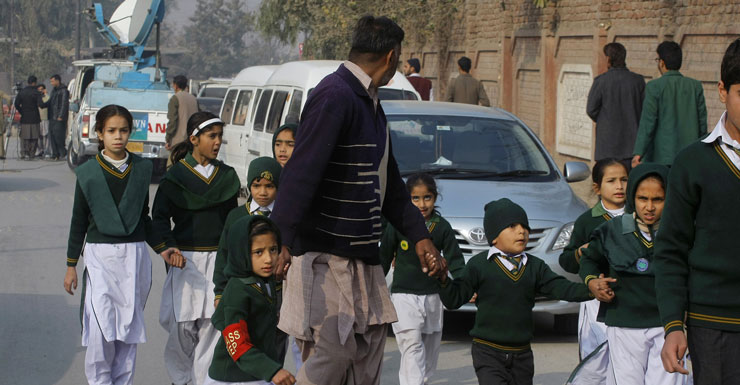 At least 141 people have been killed and 125 injured in an attack by Taliban militants on a Pakistani high school.

The raid on the school lasted for more than eight hours before the gunmen were killed.

An unnamed source told Reuters that nine insurgents were killed while other sources reported only six attackers, but noted they were all dead.

The Pakistani military said special forces had rescued two more children and two staff members at the school that has been under attack for around five hours.

The Taliban said they sent in six gunmen with suicide vests to attack the military-run school. Police said four of the attackers have been killed and the search continues for the remaining gunmen.

A tweet for the military also said a fifth militant had been killed.

“I am appalled at the tragic loss of lives in the attack,” she said in a statement on Wednesday.

“The killing of children is the most heinous of crimes. Such attacks will only strengthen our resolve to combat and prevent terrorism.”

The school on Peshawar’s Warsak Road is part of the Army Public Schools and Colleges System, which runs 146 schools nationwide for the children of military personnel and civilians. Its students range in age from around 10 to 18.

The schools educate the children of both officers and non-commissioned soldiers and army wives often teach in them.

Prime minister Nawaz Sharif condemned the attack and said he was on his way to Peshawar.

“I can’t stay back in Islamabad. This is a national tragedy unleashed by savages. These were my kids,” he said in a statement.

“This is my loss. This is the nation’s loss. I am leaving for Peshawar now and I will supervise this operation myself.”

Disturbing reports have emerged of how the attack unfolded, according to Pakistani journalist Wajahat Khan, who is based in Islamabad.

“It started around home time, when most of the parents were about to receive the kids and school was about to get done,” he told ABC News24.

“From what we know from military sources on the ground … [the] assailants, all equipped with suicide jackets and all wearing local paramilitary and police uniforms, essentially walked into the school and started picking off kids, classroom by classroom.”

he Tehreek-e-Taliban Pakistan (TTP) claimed responsibility for the attack, saying the gunmen had been ordered to shoot older students but not children.

A spokesman for the group said the attack was retaliation for the Pakistan army’s continuing operation against militants in the North Waziristan tribal area close to Peshawar.

“This attack is a response to Zarb-e-Azb and the killing of Taliban fighters and harassing their families.”

Zarb-e-Azb is the official name for the army’s offensive against strongholds of the Taliban and other militants in North Waziristan.

The offensive has killed more than 1,600 militants, according to an AFP tally.

The military has hailed the operation as a major success in disrupting Taliban militancy.

Shocked at attack on school in Peshawar. Strongly condemn this inhuman act of utter barbarism.

Retribution by the Taliban “was long expected because for the last several months there’s been a sustained campaign against militancy,” Mr Khan told the ABC.

“Pakistan was criticised for years for not doing enough [to fight the Taliban] … This is payback.”

The semi-autonomous tribal areas that border Afghanistan have for years been a hideout for Islamist militants of all stripes – including Al Qaeda and the homegrown TTP as well as foreign fighters such as Uzbeks and Uighurs.

The United States pressed Islamabad for years to wipe out the sanctuaries in North Waziristan, which militants have used to launch attacks on NATO forces in Afghanistan

There were a reported 838 or more attacks on schools in Pakistan from 2009 to 2012, more than in any other country, according to a coalition of aid agencies in their report, Education Under Attack.

Save the Children chief executive Paul Ronalds said the aid group was shocked and appalled by the attack on the school in Peshawar.

French President Francois Hollande condemned the attack on the school as “vile”.

“No words can express the ignominy of such an attack against children in their school,” Mr Hollande said in a statement.

“I strongly condemn the terrorist attack on a school at Peshawar,” he tweeted.

“This dastardly & inhuman attack exposes the real face of terrorism. My heart goes out to the families of those children who got killed by the terrorists in Peshawar.”

India has repeatedly urged Pakistan to rein in militant groups operating on its soil.

India and Pakistan have fought three wars since independence in 1947, and deadly attacks on Mumbai by Pakistan-based militants dealt a blow to tentative peace talks in 2008.