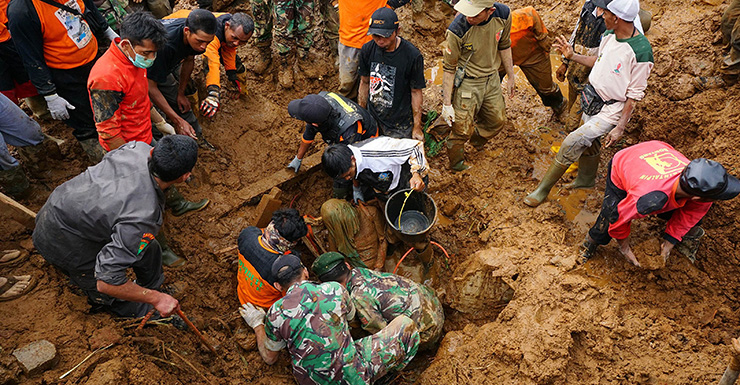 Rescuers are using bulldozers and excavators to clear debris in their search for more than 70 people missing after a landslide in Indonesia.

The death toll from the disaster has risen to 32.

• Three hurt in US shooting
• Who was TIME’s person of the year?

Hundreds of rescuers were digging through the mud with shovels and their bare hands in a desperate hunt for survivors, he said.

Military official Edi Rahmatullah told reporters: “We are trying our best to look (for) those still buried. It’s a big challenge because we are still using manual tools and the affected area is very muddy.”

Provincial search and rescue chief Agus Haryono said rescue efforts had been slow because the ground was unstable.

“The affected area is a large valley surrounded by hills. The soil is loose and muddy so we have to be very careful,” he said, adding that sniffer dogs were being deployed to detect bodies.

“The chances of finding anyone alive at this point is slim but who knows? We just hope and pray we can find survivors.”

Authorities are using heavy equipment to clear a three-metre high pile of fallen trees and rubble on the main road leading to the site of the disaster, Nugroho said.

More than 2000 rescuers, including police, soldiers and volunteers were involved.

Fifteen people were injured, including 11 seriously, and more than 800 people have been evacuated to temporary shelters.

Many of the survivors were injured from being hit by debris and are being treated in hospital.

President Joko Widodo, who arrived in Central Java’s district of Banjarnegara on Sunday, stressed the need to speed up rescue efforts.