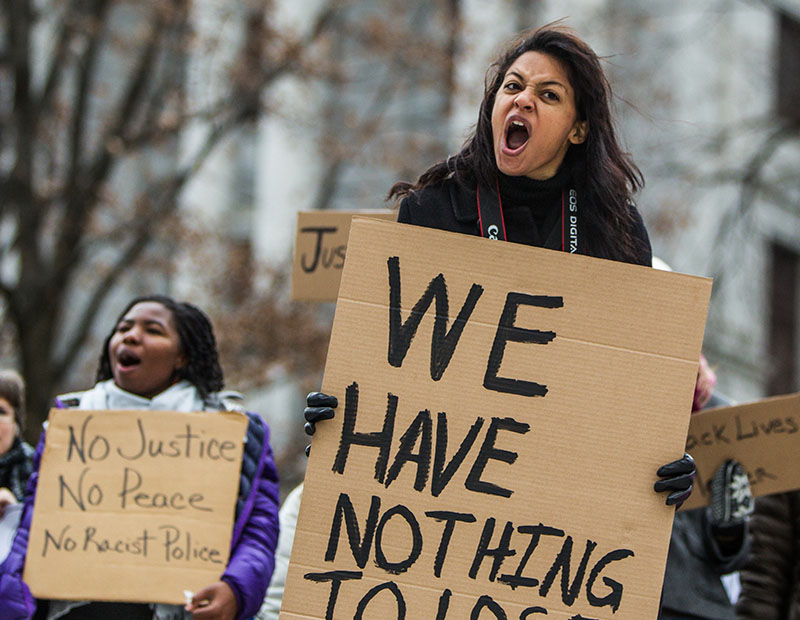 Thousands of protesters have marched towards the Capitol building in Washington DC to demand action over a spate of cases of black men being killed by police.

The march was organised less than two weeks ago in the wake of a New York grand jury’s decision not to prosecute a police officer whose chokehold on black man Eric Garner was found to have contributed to his death.

Protesters have been chanting Garner’s last words, “I can’t breathe”.

They have also used “hands up, don’t shoot”, the rallying cry from Ferguson, Missouri in the wake of the shooting of Michael Brown.

The march stretched for blocks along Constitution Avenue, before ending in front of the Federal Department of Justice, where the families of men killed by police thanked the crowd for their support and pleaded for change.

The rally comes after the high-profile fatal police shootings of Mr Brown in Ferguson and 12-year-old Tamir Rice in Cleveland as well as the death of Eric Garner.

Organisers said the event, and a parallel march in New York City, would rank among the largest in the recent wave of protests against the killings of black males by officers across the United States.

Decisions by grand juries to return no indictments against the officers involved in the death of Brown and Garner in New York have put the issue of police treatment of minorities back on the national agenda.

“I came out today seeking justice and also policy changing when it comes to policing all throughout America,” said Aisha Wilson, 37, from Paterson, New Jersey.

The New York march was organised by National Action Alliance, a civil rights organisation headed by the Reverend Al Sharpton.

“We need more than just talk,” Rev Sharpton said in a statement before the march.

“We need legislative action that will shift things both on the books and in the streets.”

The Washington protest will include the families of Brown, Garner and Akai Gurley, who was also killed by New York police and Trayvon Martin, who was slain by a Florida neighbourhood watchman in 2012.

Samaria Rice, the mother of 12-year-old Tamir who was shot dead in a Cleveland playground last month, also attended.

Protesters are expected to arrive by bus from as far away as Florida, Connecticut and Pittsburgh, according to the organisers’ website.

In New York, the march was expected to draw tens of thousands of people and was meant to reinvigorate protests that swelled after a grand jury declined to indict the officer who killed Garner using a chokehold, organisers said.

“So we demand that action be taken at every level of government to ensure that these racist killings by the police cease.”