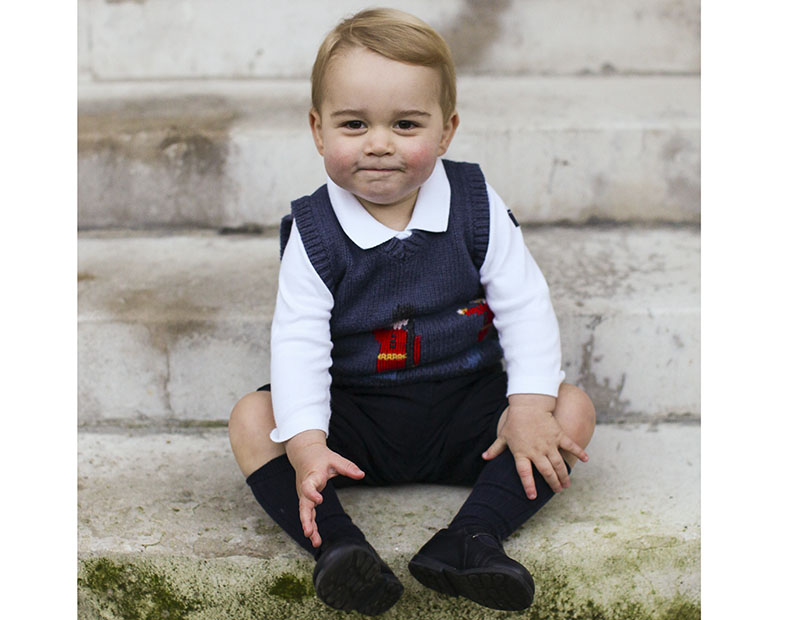 Three Christmas photos of a rosy-cheeked Prince George have been released by the royal family.

The pictures show 17-month-old George in a courtyard at Kensington Palace, where he lives with his parents, Prince William and Kate.

George is wearing a jumper depicting the soldiers who guard his great-grandmother the Queen at Buckingham Palace, complete with red tunics and bearskin hats.

The royal couple guard their child’s privacy closely and have requested that the press let him grow up without intrusion.

While George is often photographed during official engagements, royal lawyers sent a legal warning in October to a photographer who was reportedly trying to take pictures of him with his nanny in a London park.

George is due to be joined by a brother or sister in 2015 – Kate is pregnant with the couple’s second child and expected to give birth in April.

She has been suffering from the same acute morning sickness she had while pregnant with George.

However she did accompany Prince William on a whirlwind trip to New York this week, where the couple visited the 9/11 memorial and met music stars Beyonce and Jay-Z.

The latest photos of Prince George for you! Our little Prince is pictured sitting on the steps of Kensington Palace. pic.twitter.com/kWkj9aAtTz