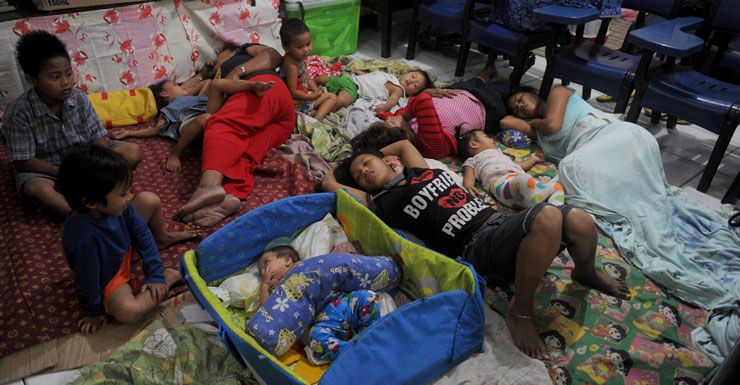 Typhoon Hagupit has weakened, a day after it left at least three people dead and sent more than a million others into shelters, sparing the central Philippines the massive devastation that a monster storm brought to the region last year.

Shallow floods, damaged shanties and ripped-off tin roofs were a common sight across the region, but there was no major destruction after Hagupit slammed into Eastern Samar and other island provinces.

It was packing maximum sustained winds of 120kph and gusts of 150kph on Monday, considerably weaker from its peak power but still a potentially deadly storm, according to forecasters.

The typhoon, which made landfall in Eastern Samar late on Saturday, was moving slowly, dumping heavy rain that could possibly trigger landslides and flash floods.

Traumatised by the death and destruction from Typhoon Haiyan last year, more than one million people fled to more than 1,000 emergency shelters and safer grounds.

Hagupit was moving across a string of island provinces and would be near the bustling capital, Manila by early on Tuesday, according to government forecasters.

Two people, including a baby girl, died of hypothermia in central Iloilo province on Saturday at the height of the typhoon, disaster-response agency chief Alexander Pama told a news conference.

Another person died after being hit by a falling tree in the eastern town of Dolores, where the typhoon first made landfall.

Displaced villagers were asked to return home from emergency shelters in provinces where the danger posed by the typhoon had waned, including Albay, where more than half a million people were advised to leave evacuation sites.

Nearly 12,000 villagers, however, will remain in government shelters in Albay because their homes lie near a restive volcano.

Three dead but no major damage in Hagupit