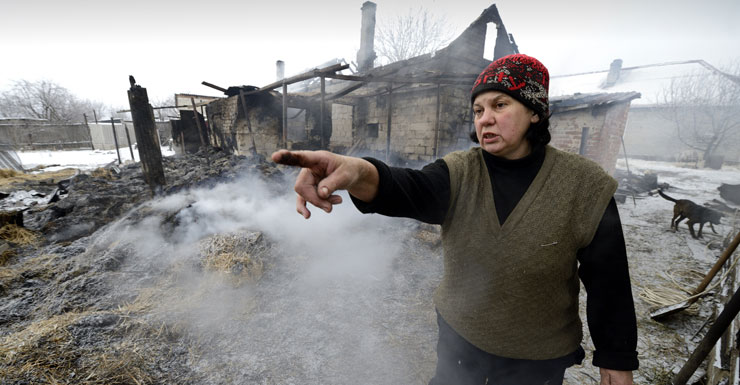 The prisoner swap raises hope there will be no casualties, like this woman whose home was destroyed in the ongoing conflict.. Photo: Getty

Five civilians have been killed in fresh violence in eastern Ukraine, where more explosions and gunfire rang out on Sunday, two days before the start of a planned truce.

Three civilians were killed and 10 were wounded overnight in the rebel bastion of Donetsk, where further explosions and gunfire were heard Sunday morning, local authorities said.

The pro-Kiev governor of the rebel region of Lugansk said two civilians were killed in the village of Kryakivka after a shell fell in the yard of a house.

Lugansk, Donetsk and the area around Debaltseve have been the main areas hit by fighting, according to the military.

Observers for the Organisation for Security and Co-operation in Europe have also reported several convoys totalling 60 unidentified vehicles headed toward Donetsk from the city of Shakhtarsk, which is also under rebel control.

Kiev has announced a new round of talks with the pro-Russian rebels in Minsk this week to try and rescue a tattered September ceasefire.

The talks are to be held on Tuesday, also the date set by both sides for a fresh truce to come into force.

Fighting between Ukraine and the rebels in the east has claimed more than 4,300 lives.