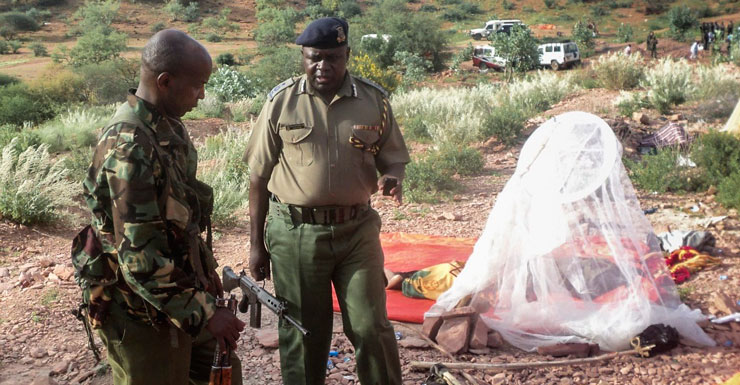 Gunmen have massacred at least 36 quarry workers in a fresh attack in Kenya’s northeast, police and the Red Cross say.

The attackers sprayed gunfire at tents where the workers were sleeping in the early hours of Tuesday morning near the town of Mandera, where Somalia’s al-Qaeda-affiliated al-Shabab and other militia have carried out a string of raids, Kenyan media said.

The gunmen then separated non-Muslims from the other workers, beheaded several and executed the rest with a bullet to the head, police sources and media reports said, a pattern of attack similar to the killing of 28 people on a bus in the same region last month.

The quarry killings follow a separate attack on Monday night in the town of Wajir – which like Mandera is close to the dangerous border with war-torn Somalia – which left one person dead and 12 wounded when gunmen hurled grenades and fired into a bar.

“Our team is on the ground undertaking assessments of the attack,” the Kenya Red Cross said on Tuesday.

Police spokesman Zipporah Mboroki confirmed the attacks, but said the force would provide exact tolls of those killed later.

However, a senior police official said 36 people had been killed and there were fears others may have been abducted.

“We have lost 36 people, but there are others missing,” said the police official, who asked not to be named. “We don’t know whether they were taken by the attackers.”

The quarry attack, about 15 kilometres from the remote town of Mandera, is close to where Islamists last month executed 28 non-Muslims who were grabbed from a bus.

The Shahab said the bus attack was carried out in revenge for police raids on mosques in Kenya’s key port of Mombasa.

Kenya has suffered a series of attacks since invading Somalia in 2011 to attack the Shabab. Kenyan forces have since joined an African Union force battling the Islamists.

No one has so far claimed responsibility for either of the attacks on Monday and Tuesday.

Somalia’s Shabab rebels on Tuesday said they carried out the massacre of the quarry workers and vowed to be “uncompromising, relentless and ruthless” in fighting Kenya.

“In another successful operation carried out by the Mujahideen, nearly 40 Kenyan crusaders met their demise after a unit from the Saleh Nabhan brigade raided them in the midnight hours of Monday at Koromei, on the outskirts of Mandera,” Shabab spokesman Sheikh Ali Mohamud Rage said in a statement.

“This latest attack was part of a series of attacks planned and executed by the Mujahideen as a response to Kenya’s occupation of Muslim lands and their ongoing atrocities, such as the recent airstrikes on Muslims in Somalia which caused the death of innocent Muslims and the destruction of their properties and livestock, as well as the continued suffering of Muslims in Mombasa,” the statement said.

“As Kenya persists in its occupation of Muslim lands, kills innocent Muslims, transgresses upon their sanctities and throws them into prisons, we will persist to defend our land and our people from their aggression.

“We are uncompromising in our beliefs, relentless in our pursuit, ruthless against the disbelievers and we will do whatever necessary to defend our Muslim brethren suffering from Kenya’s aggression.”