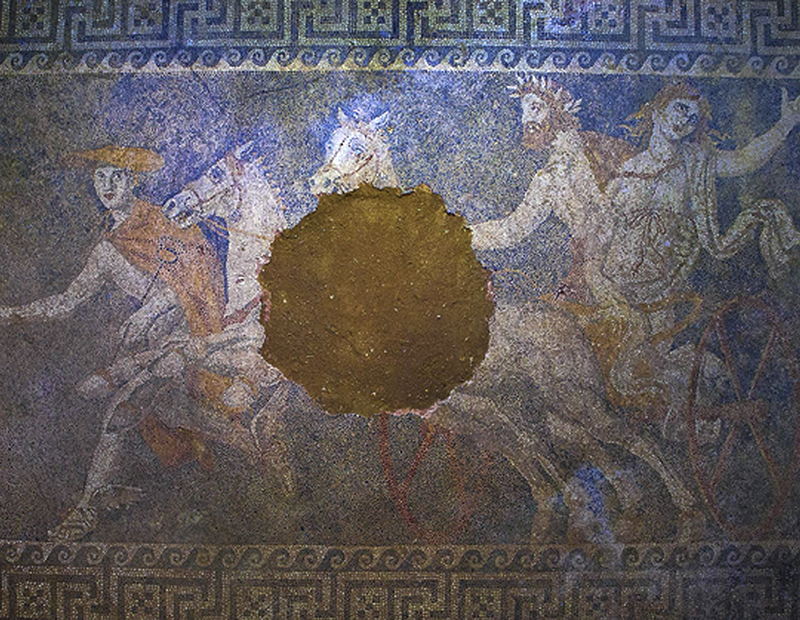 Coins featuring the face of Alexander the Great have been found at the largest tomb ever unearthed in Greece, where archaeologists are hunting for clues to solve the mystery of who lies buried there.

The enormous tomb at Amphipolis in northern Greece dates back to the fourth century BC and contains near-intact sculptures and intricate mosaics.

The discovery earlier this month of a skeleton inside the structure has added to the excitement over the site, which has enthralled the Greek public.

The archaeologist in charge of the dig, Katerina Peristeri, said they still did not know the identity of the skeleton but it was likely the tomb was built for a high-ranking individual.

Giving the first complete presentation of the excavation results at the Ministry of Culture in Athens, Ms Peristeri said the quality of the statues and the sheer scale of the tomb – which measures some 500 metres in circumference – “show that a general could have been buried there”.

The tomb was repeatedly plundered before being sealed off but Ms Peristeri said the team still found several coins around the tomb, including some showing the face of Alexander the Great and some dating back to the third and second century BC.

Archaeologists had to dig their way past huge decapitated sphinxes, break through a wall guarded by two caryatids, sculpted female figures, and empty out an antechamber decorated with lavish mosaics to finally find the tomb’s occupant.
Experts have known about the burial mound, which is 30 metres high, since the 1960s but work only began in earnest there in 2012.

“We knew we had to return there and solve the mystery of the hill,” Ms Peristeri said.

Since the unearthing of the site, deemed to be of huge historical importance and visited by prime minister Antonis Samaras in August, there has been widespread speculation over who was buried there: from Roxana, Alexander’s Persian wife, to Olympias, the king’s mother, to one of his generals.

But historians said it is highly unlikely to have been Alexander himself, who conquered the Persian empire and much of the known world before his death at the age of 32.