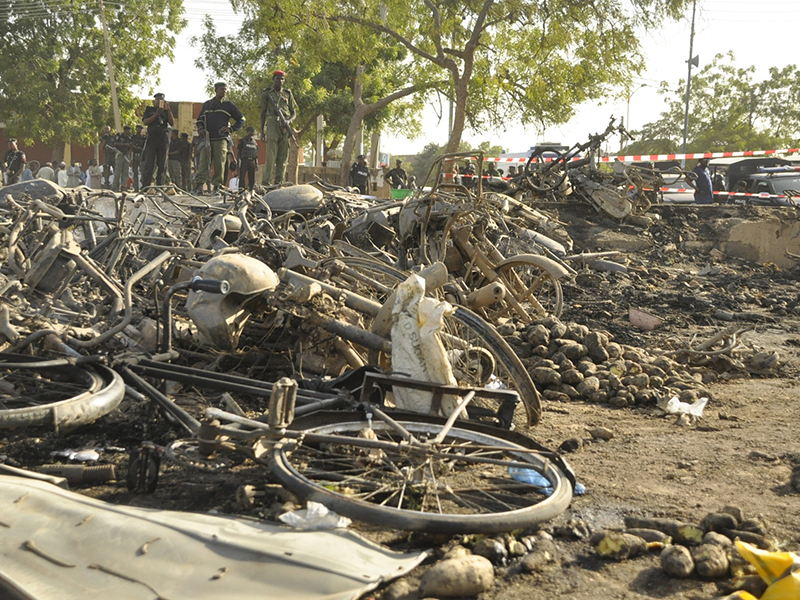 At least 120 people have been killed and 270 others wounded in a bomb and gun attack at the mosque of one of Nigeria’s top Islamic leaders.

The attack at the Grand Mosque in Kano, the biggest city in the mainly Muslim north of the country, came just as Friday prayers had started.

The mosque is attached to the palace of the Emir of Kano Muhammad Sanusi II, Nigeria’s second most senior Muslim cleric, who last week urged civilians to take up arms against Boko Haram.

The blasts came after a bomb attack was foiled against a mosque in the northeastern city of Maiduguri earlier on Friday, five days after two female suicide bombers killed over 45 people in the city.

National police spokesman Emmanuel Ojukwu said the bombers blew themselves up in quick succession then “gunmen opened fire on those who were trying to escape”.

Ojukwu said he did not know whether the suicide bombers were male or female, after a spate of attacks by women in recent months, and did not give an exact figure on the number of gunmen.

But he said an angry mob killed four of the shooters in the chaotic aftermath. Witnesses in the city said they were set on fire.

An AFP reporter at the Murtala Mohammed Specialist Hospital morgue counted 92 bodies, most of them men and boys with blast injuries and severe burns.

As night fell, hundreds of people were desperately trying to use the lights on their mobile phones to identify loved ones.

But a senior rescue official said later that there were at least 120 dead and 270 wounded. Emergency workers were still trying to visit all hospitals, he added.

The Emir of Kano last week told worshippers at the same mosque that northerners should take up arms against Boko Haram, which has been fighting for a hardline Islamic state since 2009.

Boko Haram have a record of attacking prominent clerics. In July 2012 a suicide bomber killed five people leaving Friday prayers at the home of the Shehu of Borno in Maiduguri.

Boko Haram attacks in recent months have ranged from the far northeast of Nigeria, across the wider north and northwest, using hit-and-run tactics, suicide bombings and car bombs.

Authorities in Cameroon, Chad and Niger have all expressed concern about Boko Haram’s ability to conduct cross-border strikes, particularly as the dry season approaches.