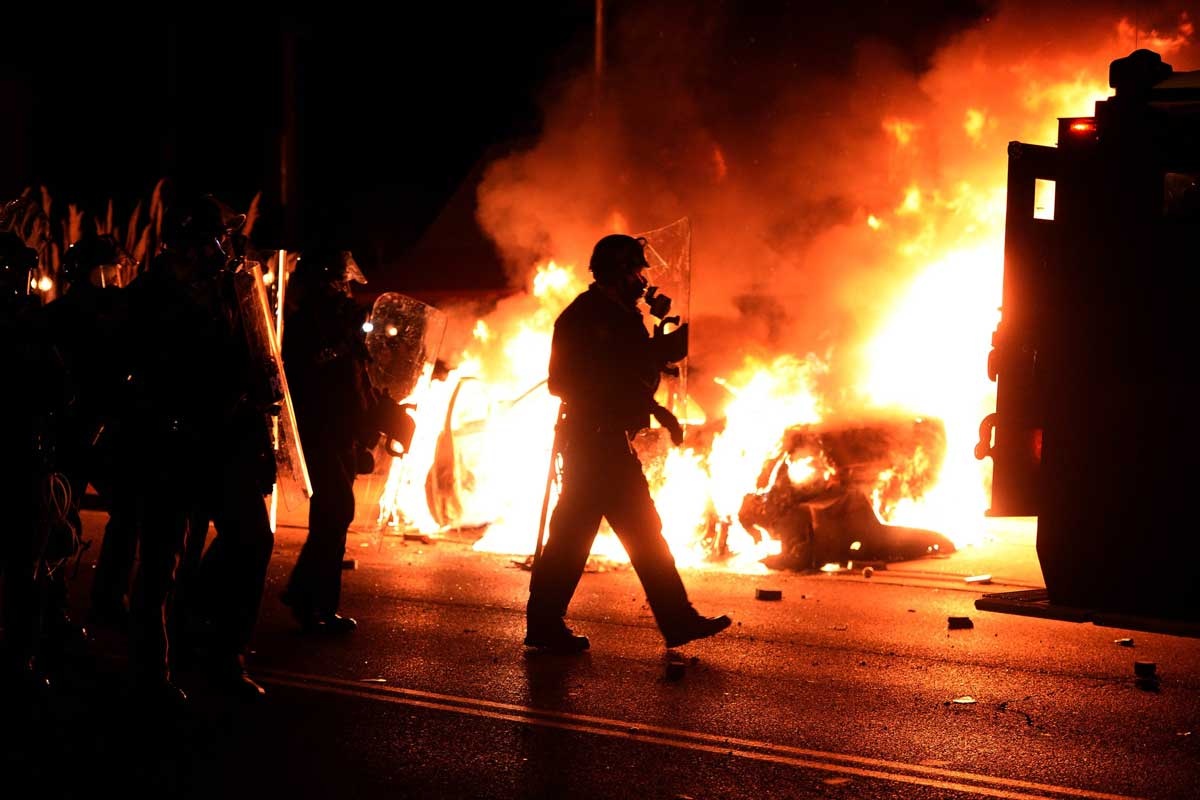 More than 2000 soldiers have been deployed in the US town of Ferguson on a second night of protest after a grand jury chose not to charge a white policeman who shot dead an unarmed black teen.

After a night of racially-charged unrest following Monday’s decision, Missouri governor Jay Nixon said the National Guard force in the Ferguson area would be tripled to halt the looting and arson.

At the Ferguson police station on Tuesday night, a cordon of 50 riot police faced off across a road with around 100 noisy protesters chanting and waving placards, including one that read: “We will not be silenced.”

Inside the perimeter of the station, National Guardsmen equipped with riot shields and batons could be seen preparing for the night.

The protest crowd was smaller than it had been on Monday, and there was no initial sign of violence, but some masked agitators could be seen on the fringes of the demonstration.

“Lives and property must be protected. This community deserves to have peace,” the governor said, as anger mounted nationwide and fresh protests took place in major cities.

Marchers disrupted traffic on bridges and the Lincoln Tunnel in New York city – leading to a number of arrests – and crowds took to the streets in downtown Washington, near the White House. Protests were also held in Boston, Philadelphia, Baltimore, Portland, Seattle, Los Angeles and Chicago, among others.

Prosecutor Robert McCulloch said 28-year-old Darren Wilson would face no charges, with the jury finding no probable cause. A separate federal investigation into whether Wilson violated Michael Brown’s civil rights is continuing, officials said. Mr Wilson shot the unarmed 18-year-old on August 9. The teenager’s death sparked outrage in Missouri, with weeks of demonstrations and riots over police brutality and the poor treatment of African Americans by police. [jwplayer mediaid=”168193″] The grand jury of nine white and three black members had been meeting weekly since August 20 to consider evidence. Prosecutor McCulloch said police had carried out an extensive investigation at the scene under “trying conditions”, including gunfire. Statements were inconsistent and some witnesses made claims that were at odds with the physical evidence. “A lack of accurate detail surrounding shooting frustrates media and general public and helps breed suspicion,” Mr McCulloch said.

The prosecutor said it had to be established where Mr Wilson was acting in self defence and used deadly force to protect himself. “The law allows all people to use deadly force to defend themselves in dangerous situations,” he said. Some witnesses claimed Wilson stood above Mr Brown and shot him in the back, despite him suffering no back wounds, Mr McCulloch said. The prosecutor said the decision would cause disappointment but it was his job to serve justice and said all decisions must be made from physical evidence.

Mr Brown’s family released a statement after the verdict announced. “We are profoundly disappointed that the killer of our child will not face the consequence of his actions,” they said. “While we understand that many others share our pain, we ask that you channel your frustration in ways that will make a positive change. “We need to work together to fix the system that allowed this to happen. “Join with us in our campaign to ensure that every police officer working the streets in this country wears a body camera. “We respectfully ask that you please keep your protests peaceful. “Answering violence with violence is not the appropriate reaction.” Thousands of people have taken to the streets with Missouri Governor Jay Nixon calling for calm and putting the national guard on standby.

US President Barack Obama decried the violence and called for rioters to be prosecuted, while acknowledging the deep-rooted frustrations of minorities who feel they are unfairly treated by police.
“There are productive ways of responding and expressing those frustrations and there are destructive ways of responding,” he said.
“Burning buildings, torching cars, destroying property, putting people at risk. That’s destructive and there’s no excuse for it. Those are criminal acts.”
Lawyers for the family of slain youth Michael Brown denounced the prosecutor whose grand jury hearing found that police officer Darren Wilson had killed the 18-year-old in self-defence.
“This process is broken. This process should be indicted,” Brown family lawyer Benjamin Crump told a news conference.
Crump criticised the way Wilson had not been cross-examined when he appeared before the grand jury, which decided not to indict him over the August 9 shooting.
But in his first televised comments since the incident, Wilson told ABC News he had feared for his life during the confrontation, believing Brown was attempting to wrestle his gun away from him.
“I can feel his hand trying to come over my hand and get inside the trigger guard and try to shoot me with my own gun,” Wilson said.
Asked if he believed he would have acted the same way if Brown was white, Wilson responded: “No question.”
The officer said he was comfortable that he had acted correctly.
“I don’t think it’s haunting. It’s always going to be something that happened,” he said, adding that his conscience was clear because “I know I did my job right”.
Civil rights firebrand Al Sharpton said the Brown case renewed a nationwide fight for greater police accountability.
“This is not a Ferguson problem…. This is a problem all over the country,” Sharpton said. “We may have lost one round but the fight is not over. They have broken our hearts, but not our backs.”
Separate protests flared, meanwhile, in Cleveland, Ohio, following the fatal shooting by police of a 12-year-old black boy holding a replica gun at the weekend.

Regardless of what happens, this matters. We matter. Keep yourselves heard #Ferguson, you have the worlds ear. pic.twitter.com/wUeik6nwR0 — Anonymous (@AnonPress) November 25, 2014

Another night of protests after Ferguson verdict