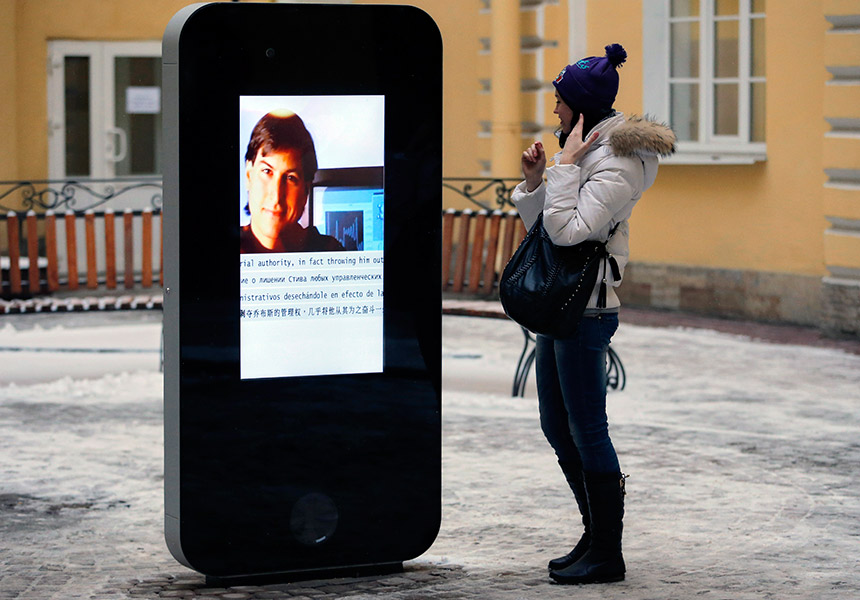 A memorial to Steve Jobs outside a Russian college has been dismantled and labelled ‘gay propaganda’ after Jobs’ successor came out as gay.

The iPhone shaped monument was erected in St Petersburg in January 2013 by a Russian group of companies called ZEFS, but was pulled down on Friday, one day after Apple CEO Cook announced he was homosexual.

According to a report by Reuters, the company cited a law which prohibits gay propaganda as the reason for pulling down the memorial.

“In Russia, gay propaganda and other sexual perversions among minors are prohibited by law,” ZEFS said in a statement.

“After Apple CEO Tim Cook publicly called for sodomy, the monument was taken down to abide to the Russian federal law protecting children from information promoting denial of traditional family values.”

Russian President Vladimir Putin last year signed a law prohibiting the spread of ‘gay propaganda’ amongst minors, but has denied there is discrimination against gay people in Russia.

Last week, the Apple CEO effectively became the most prominent gay CEO in history when he published a letter announcing that he is gay.

“While I have never denied my sexuality, I haven’t publicly acknowledged it either, until now. So let me be clear: I’m proud to be gay, and I consider being gay among the greatest gifts God has given me,” he wrote in a letter publish in Bloomberg Businessweek.

Cook said he had not spoken publicly about his sexuality before because he did not want to draw attention to himself. Rather, he preferred the focus to be “on our products and the incredible things our customers achieve with them.”

He said he did not consider himself an activist, but he realised how much he had benefited from the sacrifice of others.

“So if hearing that the CEO of Apple is gay can help someone struggling to come to terms with who he or she is, or bring comfort to anyone who feels alone, or inspire people to insist on their equality, then it’s worth the trade-off with my own privacy.”