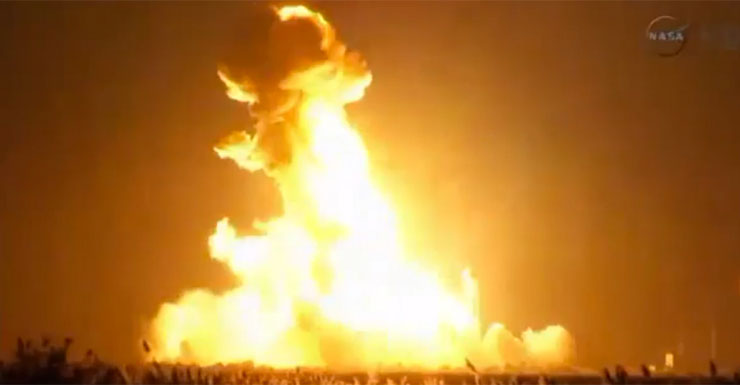 The launch of an unmanned space rocket headed for the International Space Station has ended in a fireball.

The Antares rocket faltered in US airspace only seconds after liftoff, falling back toward the ground before exploding.
NASA has confirmed that all personnel are accounted for and no one was injured in the explosion.

This was to be the third of eight resupply missions to the space station, which circles in a low orbit above the Earth.

An investigation into the blast is underway, with NASA officials warning away scavengers, saying: “people should not be looking for souvenirs.”

The rocket was fired at 9:30am AEST from Wallops Island, Virginia but barely made it off the ground before the malfunction. It was supposed to fly eastward over the Atlantic Ocean headed for the space station, but never made it anywhere near its intended target.

Orbital Sciences, the private company who built the rocket, described the incident as a “vehicle anomaly” on social media.

The launch had already been postponed one day because a boast sailed too close to the rocket’s vicinity.

Onboard the rocket was a Cygnus cargo spacecraft loaded with more than 2,000 kilograms of supplies and experiments for astronauts on the International Space Station.

Astronauts on the space station are now without more than 600 kilograms of food as well as spacewalk equipment, books, and computer resources.

One of the pieces of equipment lost in the inferno was meteor observation equipment, which would have monitored the physical and chemical properties of meteoroid dust. High-resolution video and image analysis from this equipment could have helped scientists spot previously unforeseen meteor showers.

Orbital Sciences Corporation was awarded the contract to deliver cargo to the space station in 2008. The disaster was reportedly the rocket’s first unsuccessful launch out of its five launches to date.

Live pictures of the crash site can be seen here.