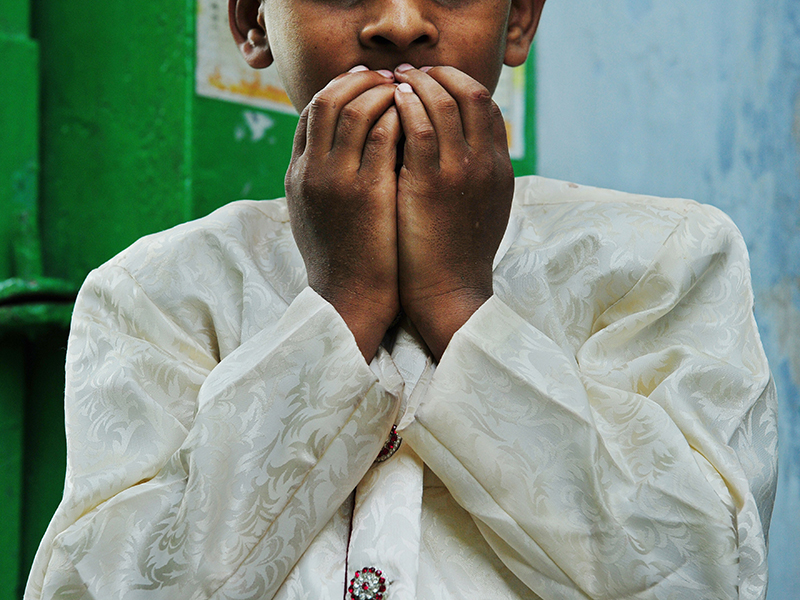 Tatheem Fatima is only 12 years old, but she is well aware of the horrors afflicting her fellow Shia Muslims in the Middle East, thousands of kilometres away from her home in New Delhi.

Videos and smart phones have brought the conflict in Iraq and Syria to many parts of the world, including to Ms Fatima’s mosque in the Indian capital.

Many of the devotees here – including children and teenagers – have images and videos on their phones of Islamic State (IS) militants murdering civilians, and Shia shrines being desecrated.

Ms Fatima said indiscriminate killing went against her religion – and said she would do anything to stop IS.

“I also want to be of some use there, by serving water, serving food, helping those who are in need of hospitalisation and assisting them. These are the things I would like to do.”

Leaders at the Karbala Mosque in New Delhi said thousands of people – including Sunni Muslims, Christians and Hindus – had registered their interest to volunteer in Iraq and Syria since June.

Coordinator Bilal Hussein said in the first instance they would send volunteers with practical skills – like medicine or engineering – to help those in need, and also spread the message that the Islamic State group did not follow Muslim beliefs.

“We want to show them that Islam gives you the message of love – not picking up arms and killing people,” he said.

Mr Hussein said he had heard reports that several Shia shrines in a number of cities in Iraq and Syria had already been destroyed by militants.

“We would form a human chain around the shrines and if they want to desecrate the shrines, they have to go through us first,” he said.

“If they kill us, [only] then they can desecrate the shrine, and we will not let that happen.”

Abbas Naqvi, who will be among the first volunteers to go to Iraq, said he was not scared of becoming a human shield.

“Everybody wants to sacrifice their lives,” he said.

“And if anybody would die there, then that person would consider themselves the lucky and blessed one whose life went in sacrifice for the protection of these shrines.”

IS strongholds in Iraq and Syria are thousands of kilometres away from India, but there are growing concerns the insurgency is making inroads into South Asia.

The Pakistani Taliban have pledged their allegiance to IS and there are unconfirmed reports that men brandishing IS flags have killed and beheaded people in Afghanistan’s east in recent weeks.

Authorities believe several dozen Indians have gone to fight with the terrorist group, and that more could be recruited.

“There is a lot of unemployment here, including among the Muslim youth,” retired Indian intelligence officer Jayadeva Ranade said.

“In a lot of these recruitment pitches that these terrorist groups make they offer them monthly payments as well as payments to their families in case anything happens to them.

“So that is an attraction for a lot of them.”

Mr Ranade said tracking fighters who returned to India would be difficult.

“India is a free country – a very free country. There are no restrictions on mobility. People can go anywhere,” he said.

“So once they come back, the difficulty will be not in assessing whether they are back or not, but after that where they move.

“The danger is that within a couple of years the agencies or the police authorities may lose track of them or consider them to have become softened because of inaction in that period and that is where the risk element comes in.”

IS has purportedly named places in India where it plans to recruit from and has declared the entire country as part of the ‘caliphate’ it intends to create.