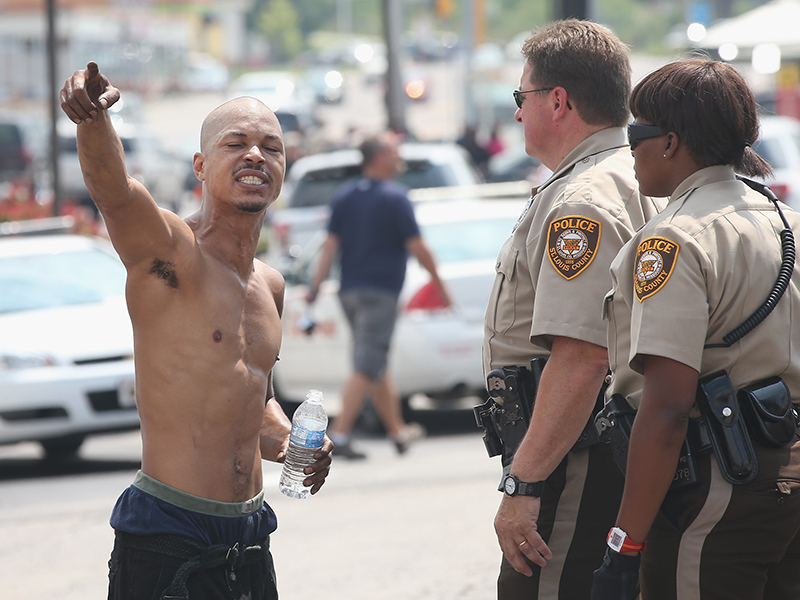 US National Guard troops have been deployed in a suburban Missouri town as authorities struggle to contain week-old protests triggered when a police officer shot dead an unarmed black teenager.

State Governor Jay Nixon lifted an overnight curfew on Monday as the soldiers arrived but tempers were running high amid ongoing controversy over the death of 18-year-old Michael Brown.

A forensic pathologist retained by the victim’s family revealed the student had been shot six times – twice in the head. Local officials have not released the results of their own autopsy.

In a statement released as Guard soldiers arrived in Ferguson, the majority African-American St Louis suburb at the heart of the unrest, Nixon said the soldiers would come under police command.

“We will not use a curfew tonight,” he added, after a two-day-old order for residents to stay at home after midnight failed to prevent clashes between protesters and heavily armed police.

Nixon condemned “the firing upon law enforcement officers, the shooting of a civilian, the throwing of Molotov cocktails, looting and a co-ordinated attempt to overrun the unified command centre.” Brown was shot dead in broad daylight on a residential street on Saturday, August 8 by Darren Wilson, a 28-year-old white police officer.

Store surveillance footage released by local police appears to show Brown shoving an employee after snatching a box of cigars around half-an-hour before he was shot.

But it is not yet clear what caused his deadly encounter with Wilson – police sources say there was a scuffle – and some witnesses have claimed he was not resisting when he was shot.

On Monday, lawyers working for Brown’s family introduced reporters to a respected former New York pathologist who has examined the body and found six gunshot wounds.

“Six bullets struck, and two may have re-entered,” Michael Baden said, indicating on a diagram how the bullets hit the top of Brown’s cranium, one of his eyes and his right arm and hand.

“All of the gunshot wounds could have been survivable, except the one at the top of the head,” he said.

Baden said he found no evidence of an alleged struggle between Brown and the officer, who is said to have been hurt in the incident, but added that he had not examined Wilson.

The absence of gunpowder on Brown’s body indicated the muzzle of the gun was probably at least 30cm to 60cm or as much as nine metres away, Baden added.

US President Barack Obama met Attorney General Eric Holder at the White House on Monday to discuss their response to the crisis. A federal civil rights investigation has already been launched.

Overnight, before the order to deploy the Guard, rioters looted stores and threw petrol bombs according to Captain Ron Johnson, the state highway patrol officer charged with restoring order.