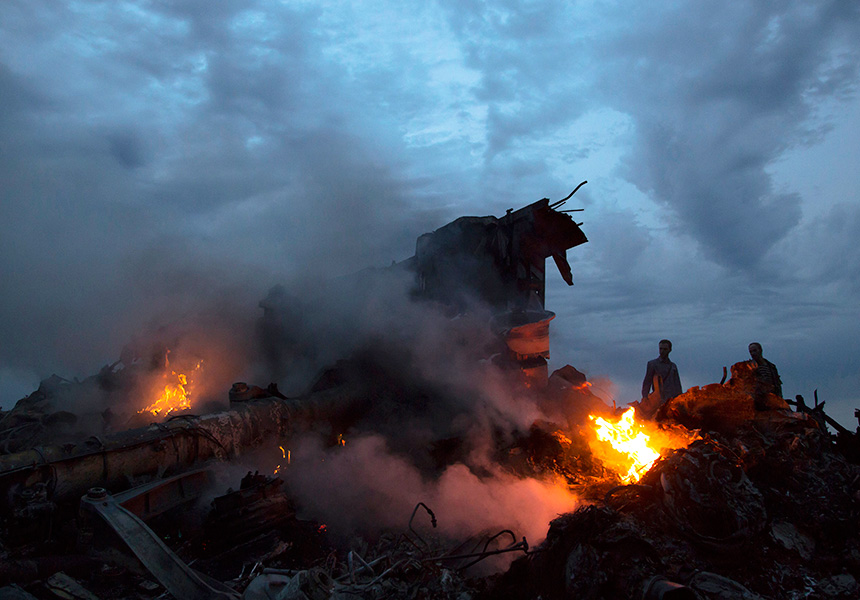 Fifteen hours after a Malaysia Airlines jet was shot down killing all 298 people on board, local authorities had not begun protecting the corpses or an investigation into the catastrophe, said an Australian journalist at the site.

Demjen Doroschenko, a cameraman in the Ukraine reporting on the Russian conflict, told The New Daily there were corpses strewn across the crash site but there was no coordinated effort by local officials to protect them or any other evidence.

“Since we arrived here last night I’ve seen 65 bodies. There are officials wandering around marking out bodies, but they are also taking pictures of themselves in front of pieces of aircraft,” Mr Doroschenko told The New Daily.

• Should MH17 have been flying through a war zone?
• GALLERY Images from the crash site
• VIDEO Witnesses capture vision of plane crashing, Abbott speaks

While the bodies lay in a Ukrainian field unattended, groups of men Mr Doroschenko described as “separatists” were looting the wallets and bags which belonged to the passengers of flight MH17.

“I have spent at least 10 hours walking around it. It is just me and a couple of other journalists and a few people who are the local version of the SES, but who are nothing like the SES. There are those people, and separatists, who have apologised to me for shooting the plane down,” said Mr Doroschenko.

“One of them is looking for passports or other identification. The wallets are all empty now – they’ve stolen all the money out of them. They have been going through the baggage. I have walked past bags lying on the ground, then walk back past it only a few minutes later to see that cameras or money have been taken out of them.

“It’s a horrible situation to see. There’s not a single wallet I have seen with any money left in it.”

He said there were no police, no government officials and no airline investigators on the scene. He said the separatists were a disparate group of men from “Russia, mostly Russia, Chechnya, Dagestan … all over the place”.

However, new images taken after sunrise show a growing number of rescuers on the site with materials used to mark out the location of the dead.

When Mr Doroschenko arrived at the crash site, he was approached by members of the group who apologised for shooting the plane down.

“We were filming last night. They came up to me and shook my hand. When they saw I was from Australia … I said, ‘There are people dead here.’ And they said ‘We’re sorry’ … The guys who fired the missiles are probably about 20 kilometres away.”

Mr Doroschenko said he arrived about an hour after the plane crashed, but 14 hours later there was still no sign of an official response.

The nearby roads had been blocked off by separatists. There were no local people around the scene, and the militants were not bothered by the presence of groups of international journalists.

“They are ignoring us, but they are also ignoring the poor people who are lying on the ground waiting for attention,” Mr Doroschenko said.

“Soon, we’ll be returning to Donetsk. We’ve walked the entire debris field and filmed just about everything. We need to get this footage out to the world so they can see what’s going on here.”

Mr Doroschenko’s reports came as a massive, global diplomatic effort was underway to understand what happened to the Malaysia Airlines jet.