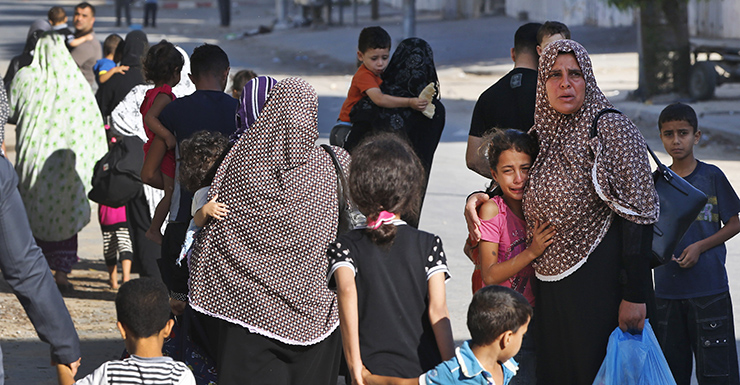 It was rocks and grenades that deepened my understanding of what’s playing out in Gaza right now.

After working as conflict journalist in Iraq for eight months, I decided to get a first-hand glimpse of the ongoing issues playing out in Israel and Palestine at the end of 2013.

My first stop on my assignment, would be the city of Hebron in the West Bank, which is just 30 kilometres outside of Jerusalem.

The day I entered the city of Hebron, I noticed local Palestinian boys and young men running through the markets and gathering together to protest against Israeli settlements that were settled within Palestinian territory and heavily guarded by the Israeli Defence Forces (IDF).

When I heard the explosions in the distance and the sound echo through the empty corridor of the abandon market as I got deeper into the city, I knew a clash was happening and I told my fixer, “take me there”.

He responded: “You’re crazy journalist man, I will get you close but I won’t go in with you because I don’t want to get shot.”

When I arrived, scores of young boys no older than 17 with hoodies and shirts wrapped around their face, were throwing and slinging rocks at IDF forces up on a perch in the hill above, who were well armed and had their assault rifles fixed on the crowd.

My fixer said: “There you go, go ahead, I won’t go further—be careful.”

As I got within the crowd and began to snap photos, boom, a rubber ball grenade exploded and sent dozens of projectiles out with a force, and as they zinged by in the air, a young boy who was simply watching the clash was struck in the leg and fell to the ground.

The IDF soldiers then fired warning shots in the air as the rocks thrown in their direction began to edge closer, but still fell short.

A young boy, who saw me snapping photos, immediately ran at me with a stick and gestured to give him my camera, because he was fearful the photos could be confiscated and IDF forces would come and raid his home and take him away.

This helped me understand why they covered their faces.

The young boy calmed down and lowered his stick as I assured him that the photos would be safe and I deleted the ones with him in it as he watched.

He looked back at up at me, then ran back and continued to throw rocks along with the others.

Looking back at the situation that unfolded that day, the rocks being thrown by the Palestinian boys and the response from the IDF are typical of what’s playing out right now on the Gaza Strip.

A well-armed and hyper-militarised Israeli military, is trying to stave off the aggressions of a less highly-equipped Hamas, who holds a strong hold in Gaza, and innocent Palestinians are suffering, more than their Israeli neighbours.

To date, and what has been noted as the highest escalation of violence between Israel and Hamas, 201 Palestinians have been killed and 1,500 have been wounded, while one Israeli has died on Tuesday.

• Click the owl for a full explanation of the current rise in tensions.

Israel suffered its first casualty this Tuesday, after Hamas fired around 120 rocket and mortar rounds into Israeli territory following a failed cease-fire proposal brokered by Egypt, which Israel agreed to, but Hamas did not.

Although, Hamas’ rocket arsenal has allegedly become more sophisticated through the bolstering of its supplies from Syria, Iran and Hezbollah, they have been very ineffective compared to Israel’s sophisticated military weaponry.

The Israeli government attributes their success, and the failure of Hamas’ attacks, on the Iron Dome missile system Israel is using, which has been a key factor in intercepting mid-air rockets fired into the country’s territory.

Israel also has a sophisticated warning system in it’s controlled territory that warns of impending rocket fire and gives its people ample time to run to cover.

There is even an app, called “Red Alert”, that goes off every time a rocket is fired, as another added security warning, and was also created to give those outside of Israel a sense of the danger.

However, on the Palestinian side, and within Gaza, there are hardly any warning systems sophisticated enough to properly let the people know of incoming attacks from the aggressive Israeli response to Hamas’ aggressions.

Israel has tried to mitigate casualties to innocent Palestinians from its bombings in Gaza, by employing a tactic referred to as “knocking on the roof”, after criticism about bombing populated areas in Gaza were viewed as immoral and wrong in parts of the international community.

The method fires an initial rocket near the area of an impending direct hit, to act as a warning system and to send all Palestinians out of the area.

Official response from the Israeli government on the technique is that it’s highly effective and the blast causes minimal damage.

A tweet from an IDF spokesperson said it will send out SMSs and personalized phone calls to warn Palestinians to get out as soon as possible, or risk death.

To see the technique view the video below:

As the international community calls for calm, it seems the issue may only get worse, as tens of thousands of citizens in the north of Gaza have been warned to leave the area, according to the Associated Press.

This viewpoint is furthered bolstered by Israeli Prime Minister Benjamin Netanyahu address on television recently and he said, “Hamas chose to continue fighting and will pay the price.”

As I hear all this, I can’t help but think, that the numbers will continue to be lopsided as aggressions from Hamas anger a more powerful, more precise military machine, that is Israel, while Palestinians within Gaza, like the boy who was watching, will fall as they get hit in the crossfire.

How grenades, rocks and guns helped me understand Gaza