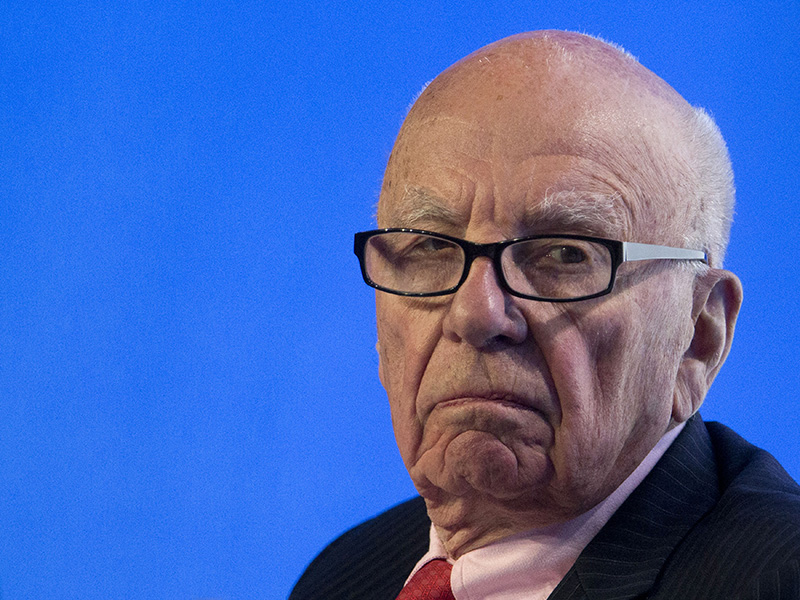 When Rupert Murdoch almost lost control of News Corp during its 1990-91 debt crisis, the then 60-year-old resolved that it would no longer be possible to maintain and grow his empire whilst retaining a majority of the shares on issue.

And after spooking his family with the near loss of the Murdoch fortune, Rupert also promised to buy out his three sisters from their News Corp entitlement. This cost him about  $600 million in payments during the balance of the 1990s.

News Corp itself also set about paying down debt and by 2007, at the peak of the boom, the company had low debt and was worth more all of its traditional US rivals such as Disney, Time Warner and Viacom.

• Could Murdoch be the next owner of Network Ten?
• Revenue slumps at Murdoch papers

And the family’s $10 billion stake in the company was also completely debt free. What a come back!

A key part of this turnaround came after the then mutually owned Australian Stock Exchange allowed News Corp to issue one bonus non-voting share for each two ordinary voting shares, commencing on November 3, 1994.

This was contrary to its own ASX listing rules and Australian law, but Rupert was a special case.

He issued them in exchange for assets in a string of takeovers during the back half of the 1990s which involved business such as satellite giant DirecTV, New World Communications ($3.5 billion), Chris Craft ($5.35 billion) and then telco giant MCI.

He even gave the Bancroft family some non-voting stock when going over the top in buying Dow Jones and The Wall Street Journal for $US5.6 billion in 2007.

However, all of these deals are completely dwarfed by the proposed $100 billion acquisition of Time Warner, so it is very difficult to predict what will happen.

Twenty First Century Fox currently has gross debt of about $US19 billion and Time Warner has long term debt of $US20 billion.

However, because the June letter of offer proposed a cash payment of $US32.42 for each of the 882 million Time Warner shares on issue, Rupert is actually proposing to borrow a staggering $US28.6 billion to fund the cash component. This is more than double any amount of cash he’s ever tried to raise on a single deal.

Indeed, Fox/Warner, or whatever it is called, would start life with gross debt of $US67.6 billion, which would be one of the 10 largest corporate debt piles ever assembled.

However, the real doozy in this deal is Rupert’s proposal that Time Warner shareholders also receive 1.531 non-voting Fox shares for each of their shares.

Based on the pre-leak Fox price of $US35.19 per share, Time Warner was being offered a staggering $US47.52 billion worth of non-voting shares. In total, the Murdochs currently control about 14 per cent of the total shares in Fox but exercise absolute control with that key 40 per cent voting block.

Throw in another 1.35 billion non-voting shares in exchange for all those trophy Time Warner assets such as HBO, the Hollywood studio, Cartoon Network and a raft of lucrative sporting rights, and the Murdochs would be down to just 7 per cent of all shares in the combined Fox/Warner, but they’d still have control with 40 per cent of the votes.

Back on November 3, 1994, the non-voting shares represented 33.3 per cent of all News Corp shares on issue. If this deal proceeds, they will have ballooned to a whopping 78 per cent, representing a gerrymander which would have made Sir Joh Bjelke Petersen proud.

With Rupert, you always take a risk that he’ll do something stupid, such as the 1991 debt crisis, the $US5.6 billion Dow Jones acquisition or the disastrous sale of News Corp’s stake in DirecTV, a move that transferred more than $10 billion of value to John Malone’s rival empire.

Rupert is not usually a seller, but he sold the DirecTV crown jewels cheaply to John Malone just to re-secure family control after Malone sneakily bought a 19 per cent voting stake in News Corp.

Rupert’s real strength over the years has been creating and building dominant businesses such as The Sun, BSkyB, Fox News, a 4th television network in the US and, more recently, REA Group in Australia.

Can a colourful 83-year-old veteran mogul be trusted to deliver if Time Warner shareholders take a majority of their sale price as non-voting shares?

With acquisitions, his record is decidedly mixed as he often goes over the top or buys things for sentimental or political reasons.

CNN founder Ted Turner is a long-time bitter enemy and Rupert would love the mind games of making a play for Time Warner. However, CNN would not sit comfortably alongside Fox News and early media reports suggest that it may be separated out from the main deal.

A dominance in US cable news would probably represent the biggest regulatory risk if the two boards do eventually come to terms and Rupert would probably love the idea of declaring that he doesn’t even want CNN, such is the ratings dominance of Fox News.

The two most interesting elements of yesterday’s Time Warner rejection statement were as follows:

“The Board is confident that continuing to execute its strategic plan will create significantly more value for the Company and its stockholders and is superior to any proposal that Twenty-First Century Fox is in a position to offer.”

Both of these go to the heart of the matter. Can a colourful 83-year-old veteran mogul be trusted to deliver if Time Warner shareholders take a majority of their sale price as non-voting shares?

More media news:
• Could Rove be The Project’s million-viewer man?
• Foxtel vs piracy: Why the pirates are winning the war

What if Rupert falls under the proverbial bus? Lachlan Murdoch as chairman? Take a look at the nightmare he created at Network Ten.

After notching up 61 years as the world’s longest serving public company CEO, succession remains the biggest issue at both Fox and its smaller separated sibling, the print-focused News Corp.

The Time Warner board are unlikely to agree to any deal unless there is a long-term management plan.

For this, Rupert would have to agree to issue some voting shares and also concede that none of his children will ever be CEO or sole chairman of the combined company.

But Rupert is fanatically dynastic if nothing else. He’s unlikely to trade the family succession for a $US100 billion acquisition, but that’s what the forthcoming negotiation will require.

Social issues are always at the heart of every takeover deal. Are you paying enough to be able to sack the board and management of your target? If not, who gets the spoils?

If Rupert wants complete boards and management control, he’ll have to sharpen his pencil and transfer even more value from Fox to Time Warner.

With Time Warner shares up 17 per cent yesterday and Fox down 6 per cent, he managed a $10 billion-plus transfer on day one which was a pretty dramatic start.

The deal might yet get done, but it will cost Rupert and his supportive shareholders a lot of their wealth, plus send them right back up the risk curve again when it comes to debt.

That said, it’s also very exciting, certainly enough to justify another airfare state-side for one of this year’s Murdoch AGMs.

• Stephen Mayne is a former News Ltd journalist turned shareholder activist who has asked Rupert Murdoch questions at numerous News Corp AGMs. He is a City of Melbourne councillor and also works for the Australian Shareholders’ Association as Policy and Engagement Co-ordinator.

Will Rupert trade a lost dynasty?