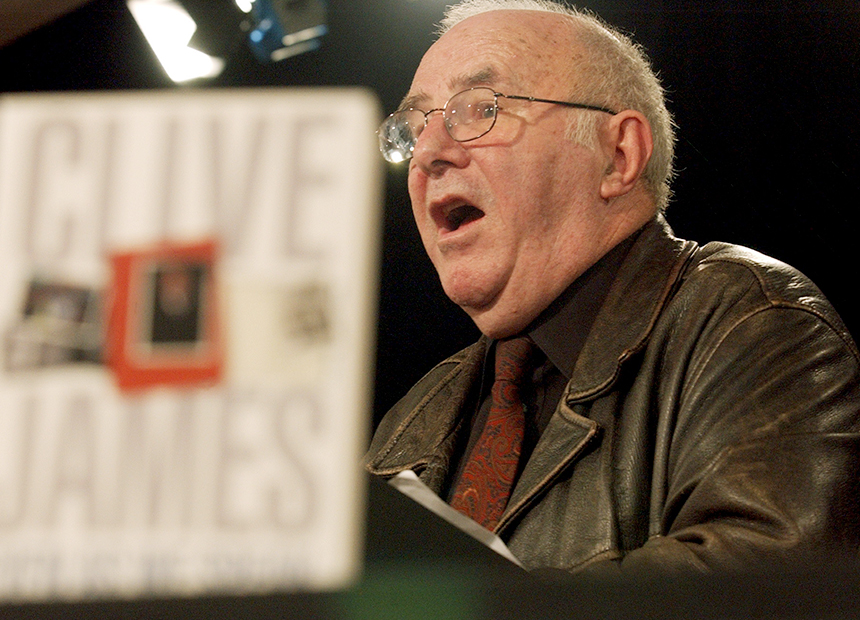 Clive James kicked off what could be his last appearance on stage with jokes about Australian Prime Minister Tony Abbott’s daughters and Hitler.

The writer, TV presenter and critic has advanced leukaemia and emphysema but wanted to chat with a live audience “one more time”.

He appeared at the Australia and New Zealand Festival of Literature and Arts in London on Saturday wearing black trousers, a black skivvy and a brown jacket.

James began by joking about why he’d made the effort to travel from Cambridge where he’s usually confined due to the need for thrice-weekly hospital visits.

“As with every other red-blooded Australian male I’m doing it to impress Tony Abbott’s daughters,” he told a sold-out crowd of 400 fans.

“That statement will get me into terrific trouble with the Australian media where I’m regarded as something of a right-winger.”

James went on to say that to celebrate his right-wing status he’d worn “an ensemble in pre-war Hitler colours”.

“I think this look is coming back.”

If that happened, the 74-year-old continued, people in the front row could pick him up and carry him aloft as organisers played Siegfried’s death march.

James spoke without notes about his abiding love of Australia – which he left in the early 1960s for Britain – and his newly-discovered love of the TV show Game of Thrones.

He said he was honoured to be invited to speak at the festival because he was an old-time believer in the Anzac principle.

Indeed, the first poem he read was his own In Town for the March about Sydney’s Anzac Day parade.

“It really does matter to me to be still thought of as someone from the colonies,” James said.

He suggested the British had been so hospitable to him partly because they saw Australia and New Zealand as a dreamland.

“They really are a dreamland.”

Australia had “everything”, James said, but he still recommends young people travel overseas to find out “the world is not like Australia”.

His declining health means he probably won’t return Down Under.

He said people had written suggesting he could use an oxygen machine on a long-haul flight while others had offered a private jet.

“(But) the truth is I can’t. Australia is a long way. If you’ve got weak lungs it can’t be recommended.”

James read Deep River Talk by the late Hone Tuwhare whom he described as “the best of the lot” when it came to Maori poets.

“He (Tuhwhare) was great and he’s gone, but if you can write like that you will have been always there.”

The 74-year-old also read a section of English poet U A Fanthorpe’s Not My Best Side and a passage of his own translation of Dante’s The Divine Comedy.

Both were about dragons. James had previously revealed one of his ambitions was to live long enough to see the fourth season of Game of Thrones on DVD.

The Australian’s final reading was the most poignant.

Prompted by the audience he read his own recent work Sentenced to Life.

It alludes to his extramarital affair revealed in 2012.

“My sin was to be faithless,” James read.

“I would lie as if I could be true to everyone at once, and all the damage that was done, was in the name of love. Or so I thought.”

The poem concludes with the author remembering his homeland: “The sky is overcast here in the English autumn. But my mind basks in the light I never left behind.”

At one point during the hour-long session he checked his watch and stated: “I know very well how time can run away.”

He received a standing ovation as he left the stage.