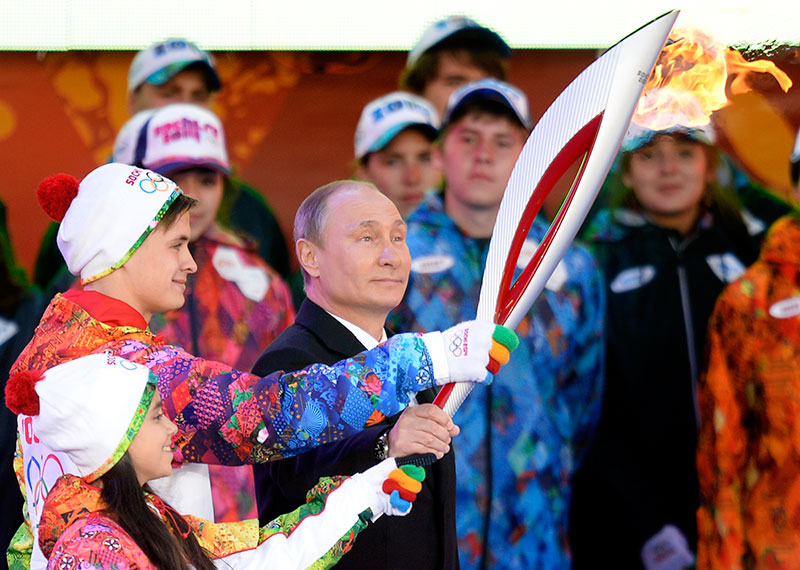 The IOC ‘big top’ is about to roll into Sochi. To paraphrase the Wiggles, this circus should be all lights, cameras and action. Some of the action, however, may not be to the IOC or the Putin government’s liking.

This became starkly apparent with the recent terrorist attacks on Volgograd which left 34 people dead and many more wondering whether the Sochi circus is worth the cost in lives and money.

Already the Putin government has spent $US51 billion on making Russia’s most ‘summerish’ city a winter wonderland. Originally, the Russians had budgeted a lazy $US12 billion, but the ‘circus’ has become a cash-cow for Putin’s cronies.

The attempted bribing of Baumann is indicative of the corruption and human rights abuses already associated with these games.

The companies of his former judo partner, Arkady Rotenburg, have pocketed $US7.4 billion from Olympic contracts. Another crony, Russian Railways’ Vladimir Yakunin, has netted $US9 billion constructing arguably the world’s most expensive road; an 18-mile stretch linking Sochi’s seaside venues with those in the mountains at Krasnaya Polyana.

Opposition figures, Leonid Martynyuk and Boris Nemtsov, claimed in May 2013 that over $US30 billion of the Games’ budget had been lost in either kickbacks or embezzlement. If this figure is correct, it exceeds the combined budgets of the London and Vancouver Olympics.

The organisation administering this free-for-all is the Russian Government’s Olympstroy which seems particularly touchy on questions about corruption. Just ask the filmmaker Simone Baumann. Her film, Putin’s Games, is due for release this weekend. It highlights the corruption and environmental damage associated with the construction of Sochi’s Olympic venues. Baumann was apparently offered £600,000 by Russian government officials to pull the film.

Furthermore, companies involved in the construction of the main Olympic stadium and village have withheld wages or underpaid their workers, and confiscated their passports and work permits.

Such practices are creeping into IOC and FIFA sponsored events and do little to bolster these bodies as upholders of the rights of labour. If the goings-on in Sochi are any indication, the rights of a corrupt oligarchy have taken precedent over those of workers.

More media attention has been paid to Putin’s crackdown on freedom of expression, evident in the Pussy Riot case, and his draconian anti-gay rights legislation passed last July. In response some foreign leaders have decided against attending the games, and gay rights protestors have targeted Olympic sponsors such as Coke, McDonald’s and Samsung.

As the IOC marketing commission chair Gerhard Helberg confessed, Putin’s anti-gay bash “could ruin a lot for all of us.”

But by far the most pressing problem for Sochi will be the threat of terrorism. Though no group has claimed responsibility for the Volgograd bombings, media speculation has focused on insurgency groups in the Caucasus region between the Black and Caspian seas.

Situated on the Black Sea, Sochi is the premier resort town of this troubled region. It lies just north of Russia’s border with the disputed territory of Abkhazia. This territory secured autonomy from Georgia after a bloody war in 1992-93, which resulted in the ethnic cleansing of Georgians from the region.

To the east are the Russian republics of Chechnya, Ingushetia and Dagestan. Over the past two decades they have been constant irritants to Moscow. During the 1990s Russian forces fought two wars against separatist rebel forces in Chechnya. The latter war was caused by the growth of Islamic militancy in the republic and its spread into neighbouring Dagestan. Though quelled by Russian counter-terrorism forces, separatist and jihadist insurgencies have continued throughout the region and the ramifications have even been felt in Moscow.

The Sochi circus provides the perfect stage for the region’s insurgents to reignite their separatist and jihadist causes. As the former Caucasus-based journalist Valery Dzutsev noted: “these Olympics present a one-time opportunity for insurgents to basically remind the world of their existence.”

The most notable of these insurgents is the Chechen jihadist, Doku Umarov. Leader of the terrorist outfit, Emirate Caucasus, Umarov has pledged to disrupt the games which he suggests will be staged “on the bones of our ancestors.” As “mujahideen”, Umarov has called on his followers to “use any methods that Allah allows us” to stop the games.

Umarov’s call should not be taken lightly. His outfit has a solid track record of terrorist attacks on transport hubs. In 2010 the Emirate attacked the Moscow Metro killing 40 people. The next year it targeted Moscow’s Domodedovo Airport, killing a further 37.

Umarov’s call for a jihad on the games stems in part from Russia’s failure to acknowledge or apologise for the Circassian Genocide. The Islamic Circassians were the indigenous peoples of the north-west Caucasus encompassing Chechnya, Ingushetia and Abkhazia. When Tsarist Russia finally conquered the region in the 1864, the Circassians were either murdered or expelled to the Ottoman Empire or other parts of Russia.

According to the New Jersey based Circassian Cultural Institute, over 1.5 million people were killed and another million “expelled” during the 1860s and 1870s.

Sochi was central to this genocide. It was the port through which many Circassians were deported. Consequently, the staging of the games in Sochi has caused great offence amongst the Circassian diaspora.

When Sochi was awarded the games in 2007, Circassians appealed against the IOC decision. In 2010 the Circassian Cultural Institute launched the ‘No Sochi 2014′ campaign. As the Institute emphasised, the games will be staged on the 150th anniversary of the genocide’s commencement.

For decades the Circassians have pushed Moscow to recognise the genocide. In 1994 the then Russian President, Boris Yeltsin, acknowledged that Circassian resistance to the Tsarist forces was legitimate, but baulked on the question of genocide.

In 2005 the Circassian activist, Murat Berzegov, petitioned the Russian Parliament to both recognise and apologise for the genocide. Moscow refused.

The genocide was recognised by the Georgian parliament in May 2011, but Tbilisi and Moscow are not on friendly terms. In 2008 they went to war over the separatist claims of South Ossetia and Abhkazia.

No doubt the games will fuel a renewed push among the Circassian diaspora for recognition of the genocide.

Furthermore, if Umarov’s threats are any indication, the games may also spark the intensification of rebel terrorist activity in the Caucasus and throughout Russia. This activity may differ from the terrorists’ traditional tactic of bombing markets and bus and train stations.

Recently, an Islamist hacker group, Anonymous Caucasus, threatened to launch cyber warfare on the games under the banner of ‘Pay-back for Sochi.’ The group also has a solid track record, recently hacking into the websites of Sherbank and the Bank of Russia. Time will tell if Anonymous can breach Sochi’s security cordon during the games.

The city is about to go into lockdown until the end of the games. It will be protected by the air force and surface to air missiles, and entry will be restricted to those who have an Olympic passport.

All of this raises the question of whether these sporting mega-circuses are worth the trouble and the expense. Security costs for staging the Olympics have escalated markedly. From an initial estimate of $US361million, the London Olympics’ security bill blew-out to $US1.6 billion.

Given the scale of Sochi’s security needs, Putin’s bill will be much higher.

Nonetheless, he will be hoping that his and the IOC’s circus will be trouble free. But given the history of the region and the corruption associated with staging the Sochi games, broader questions must be asked about the longterm future of these five-ringed circuses.