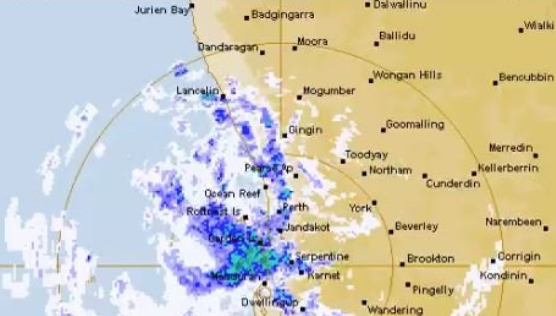 High-intensity storms, like this 2021 weather system, are expected to hit WA throughout winter. Map: BoM

West Australians have been urged to take precautions and prepare their properties for severe weather with the first significant cold front of the new storm season set to hit the state next week.

Every year from May to October, storms bringing lightning, hail, flash flooding and gale force winds cause significant damage across the southern half of WA, with the State Emergency Service receiving more than 2000 requests for help over the past last two winters.

The Bureau of Meteorology is forecasting a cold front to reach western parts of the state during the middle of next week, bringing wet and windy conditions.

Perth set for a soaking

Perth is forecast to have up to 30mm rain across Wednesday and Thursday, with similar falls likely across a number or regional centres.

“While most of the state is still experiencing sunny and mild weather, now is the window of opportunity to prepare before the full force of storm season hits,” he said.

“We often see the most significant storm damage occurring in May, as people typically wait until the weather starts to turn before starting to prepare their homes for severe weather.”

The bureau’s WA Manager James Ashley said the southwest of WA typically experienced four to six cold fronts each month through the cooler months, with one to two of those considered severe.

“Southwest WA, which includes the metropolitan area, could see the first severe cold front of the season as early as next week, which is a timely reminder for all of us to follow the advice of local emergency services before, during and after severe weather,” Mr Ashley said.