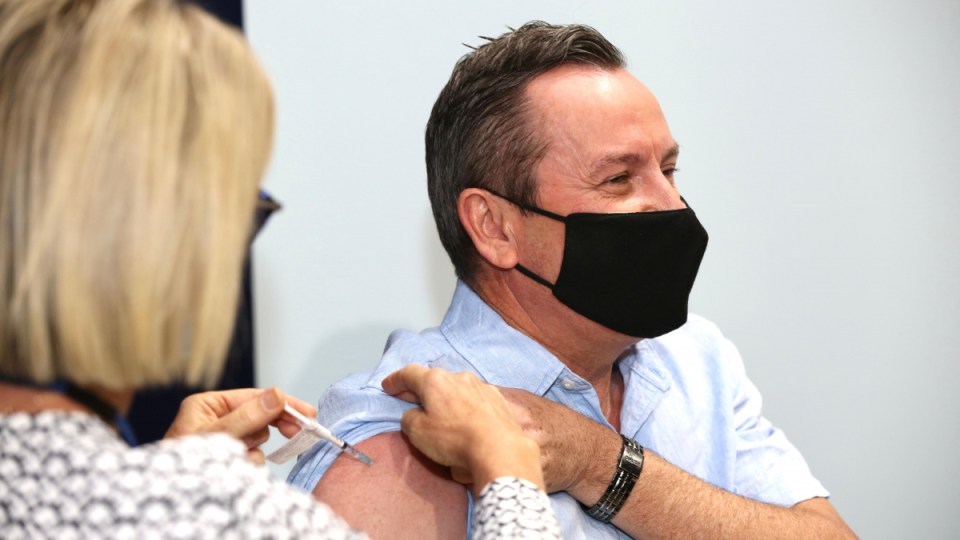 WA Premier Mark McGowan has had all his jabs, but still enter quarantine after returning from Sydney. Photo: AAP

Five new travel-related cases were also reported, taking WA’s number of active infections to 877. No cases are in hospital.

Mr McGowan, who says the reopening date is locked in, is due to fly to Sydney next Thursday to prepare to give evidence in the Federal Court defamation action launched against him by Clive Palmer.

He is expected to appear in court between February 26 and 28, meaning his quarantine period upon returning to WA will coincide with the border coming down.

Anyone isolating in WA under the current travel restrictions will be free to depart from March 3 regardless of whether they have served the full seven days.

But the Premier says he’ll commit to a week in isolation regardless.

“It is a coincidence that when I return, the border will come down a couple of days later. It’s a coincidence I am unable to avoid,” he told reporters on Friday.

“But I’ll be doing seven days of quarantine. I’ll be working from a hotel room, doing the full seven days, just so there can be no argument that somehow this was put in place to benefit myself.”

Mr McGowan reiterated that it was Mr Palmer who had launched the initial defamation action, prompting the Premier to launch a counter-claim.

The billionaire mining magnate this week gave evidence in the matter, claiming he had feared for his safety after the WA government passed extraordinary legislation aimed at quashing his damages claim against the state.

The government’s modelling suggests WA’s caseload will peak at the end of March at around 10,000 daily infections, almost 500 hospitalisations and four deaths.

New public health restrictions will come into effect from Monday including density limits at public venues.

Madonna King: We deserve more from our leaders than a tussle between two brands of timid
NSW rolls back restrictions as COVID claims another dozen lives
Today's Stories

WA set to drop quarantine – except for Premier Mark McGowan