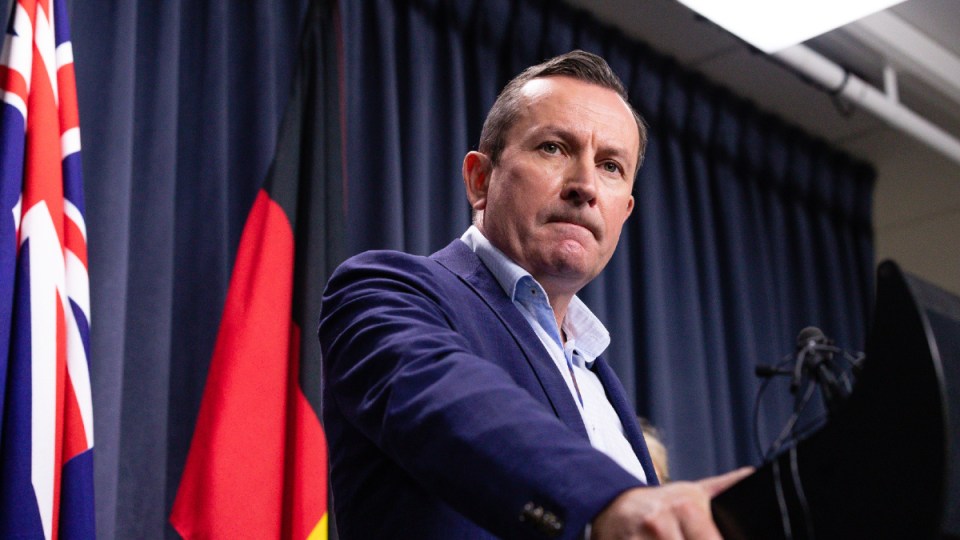 Western Australia will end nearly two years of seclusion when its hard borders come down on March 3 after the premier conceded there was no prospect of stopping Omicron.

Fully vaccinated domestic travellers (triple-dosed if eligible) will be able to visit the state without having to quarantine, but unvaccinated travellers will remain locked out.

Making the announcement late Friday, Premier Mark McGowan insisted he would not backflip again after cancelling the state’s initial February 5 opening back in January.

As the state opens up, tougher public health measures will be introduced from Monday including extending the wearing of masks at indoor venues across the state.

It comes as residents of NSW, Victoria and the ACT are celebrating the winding back of restriction in those states, with dancing making a comeback on Friday night.

WA reported 194 new local cases on Friday and is on a trajectory to peak at 10,000 daily infections and four daily deaths at the end of March.

Mr McGowan acknowledged there was no prospect of stopping an outbreak which now numbers 794 active cases.

“Eventually there comes a point where the border is ineffective when you get to high case numbers within the state,” Mr McGowan told reporters.

“It’s plain to see that four weeks of caution has paid dividends. It means it is now far safer to relax our hard border settings.”

Mr McGowan gave an assurance that the “date is locked in”.

“I can’t foresee a situation where it would change. It’s only 12 days away so it’s a lot closer than last time,” he said.

WA’s ‘level one’ restrictions will come into effect in Perth, Peel, the South West, Great Southern and Pilbara regions, including a one person per two square metres rule at hospitality and entertainment venues, gyms, beauty services and places of worship.

Home gatherings will be limited to 30 people and private outdoor events in non-home settings to 200 people.

Visitor limits will also come into effect at hospitals and aged care venues, but people will not be required to work from home.

International travellers will also be allowed back in, but those who are unvaccinated must serve two weeks in hotel quarantine, with the number of unvaccinated overseas arrivals limited to 70 per week.

The border will come down just days after Mr McGowan returns from testifying in a Federal Court defamation matter but he still intends to do one week quarantine.

The premier is due to fly to Sydney next Thursday to prepare to give evidence in the Federal Court defamation action launched against him by Clive Palmer.

He is expected to appear in court between February 26 and 28, meaning his quarantine period upon returning to WA will coincide with the border coming down.

But the premier says he’ll commit to a week in isolation regardless.

“It is a coincidence that when I return, the border will come down a couple of days later. It’s a coincidence I am unable to avoid,” he told reporters.

“But I’ll be doing seven days of quarantine. I’ll be working from a hotel room, doing the full seven days, just so there can be no argument that somehow this was put in place to benefit myself.”

Light up the dance floor

Residents of NSW, Victoria and the ACT have enjoyed their first night back on the dance floor as the summer COVID-19 outbreak appears to be subsiding.

Indoor dance floors reopened as part of a mass easing of restrictions on Friday, with the changes coming as calls grow for consistency in COVID restrictions across Australia.

AI Group chief executive Innes Willox says bringing myriad rules together Australia-wide should be a top priority for the next national cabinet meeting, due to be held in the second week of March.

But health experts are warning some restrictions may need to be reintroduced in the lead-up to winter.

University of Melbourne epidemiologist Tony Blakely welcomed the eased restrictions but warned new variants of the virus could emerge in the next few months.

“It’s like a tabletop mountain. We’ve gone up the curve, we’re coming down, and as we come down, that’s the time you release these restrictions,” he told the Seven Network on Friday.

“There will be some little bumps on the way into winter with extra infection happening amongst those people who weren’t infected in the first wave, and also some of us whose vaccine immunity wanes.”

Thirty-six deaths were reported nationally on Friday including 15 in NSW, 14 in Victoria, six in Queensland and one in the Northern Territory.

There were also 24,910 new COVID-19 cases recorded across Australia.

The ACT and Tasmania recorded 561 and 623 new cases respectively.
WA recorded 194 local Omicron cases as the virus spreads to disability care and another aged home.

The state has 724 active cases but no one in hospital.