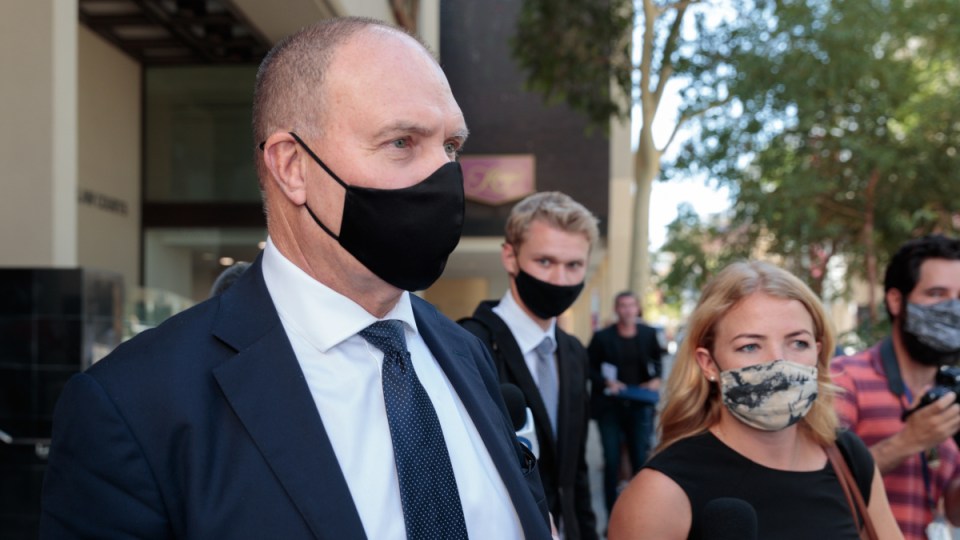 Mr Power, 63, and his son Nicholas, 36, admitted on Friday that they failed to self-quarantine upon returning to Perth from Queensland in October last year, an offence that carries a maximum penalty of 12 months’ imprisonment.

A police prosecutor told Perth Magistrates Court the pair’s actions had put WA residents at “unacceptable risk” and a term of imprisonment was appropriate.

But defence lawyer Sam Vandongen urged the magistrate to instead impose substantial fines on the pair.

He also flagged they would apply for spent convictions, which would allow Mr Power, who is the chairman of Perth Airport and a former Fortescue Metals Group chief executive, to continue in his board roles.

Mr Vandongen cited a psychological report that said Mr Power had suffered stress-induced “cognitive distortions” that had clouded his judgment.

“Mr Power does not at all back away from the fact he did the wrong thing,” he said, adding that both men had cooperated with police.

“This is not an instance where Mr Power felt he was above the law or arrogantly or cynically decided this was not for him.”

More than a dozen personal references were submitted to the court, including one from billionaire FMG chairman Andrew Forrest.

The court heard Mr Power and his son had flown separately to Queensland in September last year. They spent a week mustering cattle at the family’s Bushy Park station near Mount Isa.

They flew back to WA together on a private helicopter, staying overnight in Exmouth in the state’s north – where they were captured on CCTV footage moving freely around a resort while not wearing face masks – before arriving at Jandakot Airport on October 9.

At the time, travellers from Queensland were required to isolate for 14 days upon arrival in WA under the state’s controlled border regime. They also had to complete G2G pass declarations advising of their recent movements.

But the pair did not make G2G applications and failed to isolate, with Neville Power joining other business elites and politicians at the Telethon Ball on October 16.

Father and son each pleaded guilty on Friday to two charges of failing to comply with a direction under WA’s Emergency Management Act.

The prosecutor said Neville Power would have been fully aware of his responsibilities given the role he had played in helping to manage the economic effects of the pandemic.

“We submit it was an act of wilful blindness to his obligations,” he said.

Mr Vandongen said the psychological report had referenced various stresses in Mr Power’s life, as well as the impact of previous time he had spent in quarantine.

He also outlined a report by Clay Golledge, a Perth doctor specialising in infectious diseases, which said Mr Power was highly unlikely to have brought COVID-19 back to WA.

“I must say it doesn’t do much for me … he could well have been with people who had COVID but they just didn’t have any symptoms.

“All of his behaviour put people at risk.”

Ms Woods will sentence the pair on February 24.

The NSW government has defended its handling of the pandemic during the Omicron wave as its Premier looks to revive the CBD to jump-start the state’s economic engine.

In his evidence, Mr Hazzard brushed off queries from the committee, chaired by Greens MP David Shoebridge, that he was warned the December 15 scale-back of virus rules would led to “death and despair” in aged care.

The changes in December included ending mandatory mask-wearing and eased density limits in venues, the inquiry was told.

Mr Hazzard said while there were “constant” discussions with aged care providers, “there was nothing on that specific decision”, and he rejected claims of a “massive breakdown in communication” with the sector.

“We have managed this issue to the very best of our ability … NSW and Victoria have done an extraordinary job”.

Mr Hazzard also denied suggestions that, regarding Omicron, the state government had “let it rip” over summer against health advice, insisting at the inquiry that the community knew it was trying its best.

“Nothing has been done lightly, it’s been done with great gravity,” he said, labelling NSW’s death rate, currently about 1600, as “infinitesimally small” compared to other countries.

Aged Care and Community Services chief executive Paul Sadler accused the government of knowing the aged sector was unprepared for the Omicron outbreak, but went head with relaxing COVID-19 restrictions in December anyway.

It was the first hearing since September as the government loosened lockdown rules.

The inquiry coincided with the third Sydney CBD Summit on Friday where Premier Dominic Perrottet resisted pressure to promise his government would ease the few remaining COVID-19 restrictions by the end of the month.

“They were topics on the agenda, but ultimately … that’s a matter for a cabinet,” he said.

“This is about ensuring that when we do open up … we come back strongly.”

The rules, which include mandatory masks in office spaces, density limits on hospitality and a recommendation people work from home, have been extended until at least February 27.

NSW on Friday reported 19 deaths and 8950 new cases. There were 1716 people in the state’s hospitals with COVID – down 79 from Thursday.