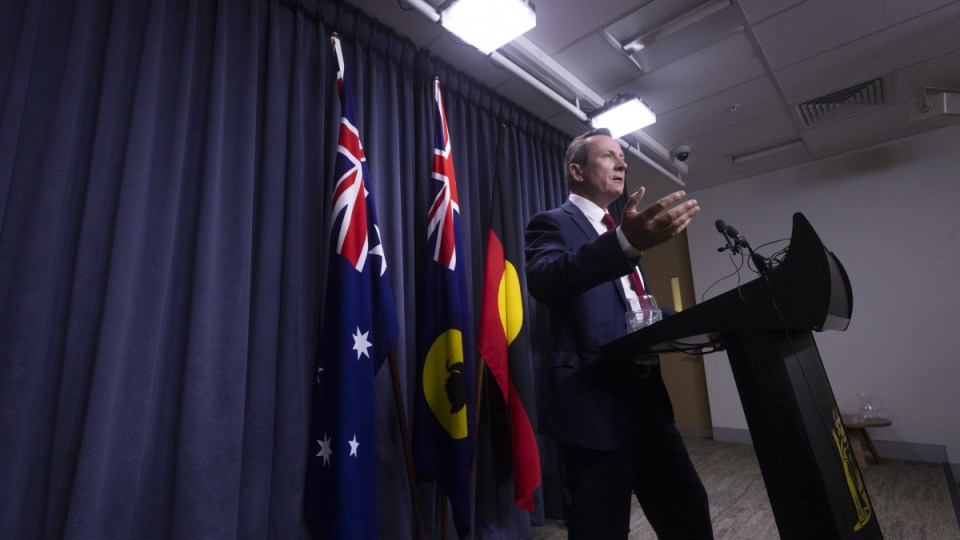 Mr McGowan made the border announcement at a late-night media briefing in Perth. Photo: Getty

Mr McGowan sensationally backed down on his promise to reopen the state to the rest of the country on February 5, with no date set on when free travel to WA would resume.

In a late-night press conference on Thursday, Mr McGowan said WA reopening as planned on February 5 would be “reckless and irresponsible” given sheer number of COVID cases in the eastern states.

Mr Albanese said while some might have been disappointed by the border decision, Mr McGowan had made the right call.

“I told [Mark McGowan on Thursday night] I respected and supported the decision,” Mr Albanese said in Sydney on Friday.

“People were keen to visit loved ones, but the first priority of Mark McGowan has been to keep WA safe. People in WA enjoy life almost as normal, certainly compared with NSW.”

Mr McGowan said the border delay would allow for more people to receive booster doses and for children to get fully vaccinated against COVID.

He had initially said the state would reopen the border at 90 per cent fully vaccinated. WA is now at 89 per cent.

Mr Albanese said the booster rollout would be critical to providing COVID protection.

The border decision means neither Mr Albanese nor Prime Minister Scott Morrison will be likely to get into WA for campaigning ahead of the federal election. It must be held by May 21 at the latest.

Treasurer Josh Frydenberg said while he could understand the decision made by the west, more certainty was needed for residents going forward.

“[Western Australians] would be asking, ‘If not now, when?'” Mr Frydenberg told the Seven Network on Friday.

“This is a decision that the Western Australian government themselves have taken, and one for them to explain, but obviously people in WA would be disappointed with the decision.”

Defence Minister Peter Dutton said the federal government would provide support to WA after the decision to delay on its border.

“We’ll provide whatever support required to WA, we want to see Australia get through this,” Mr Dutton told the Nine Network.

“At the moment, the most important thing is to see WA through to the other side because people are separated from their families.”

But the border move has been slammed by the president of the Australian Medical Association Dr Omar Khorshid.

“Gutted … seems Mark McGowan is a one-trick pony when it comes to COVID-19,” he said on Twitter.

“This decision should be acknowledged as a failure by the WA government to prepare and a broken promise.”

Dr Khorshid said WA could not stick its head in the sand, with an outbreak in the state inevitable.

It comes after another deadly day of the pandemic across the country, with NSW recording its highest daily death toll since the pandemic began.

There were 46 deaths reported in NSW on Friday, including seven that were historical. One was an infant, whose death while positive with the virus has been referred to the state coroner.

Victoria had 20 fatalities on Friday, while Tasmania also had a new death, its first since April 2020.