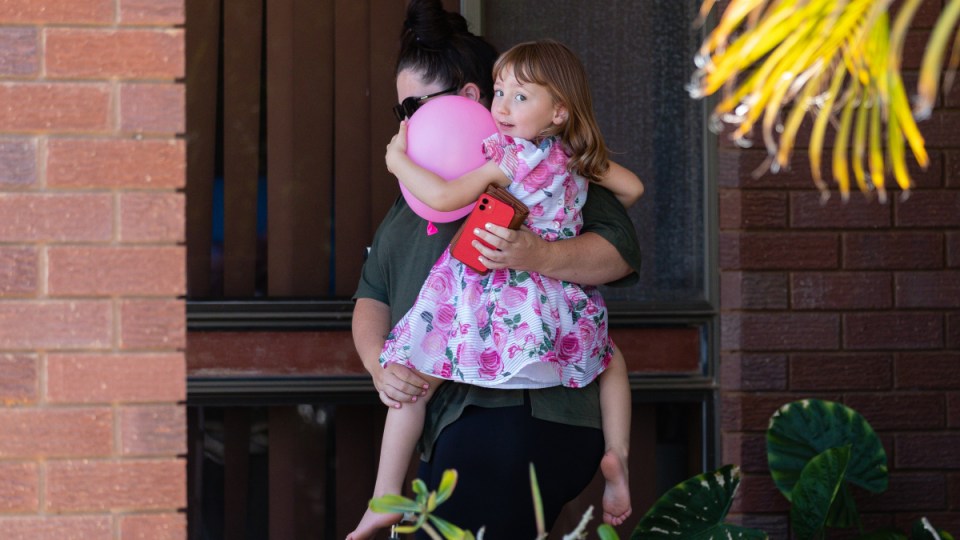 Cleo Smith and mum Ellie leave their house the day after the four-year-old was rescued by police. Photo: AAP

West Australian police have released audio of the moment four-year-old Cleo Smith was found against all odds, as investigators prepare to lay charges against her alleged abductor.

Cleo was found alive and well in the early hours of Wednesday morning, 18 heartbreaking days after she went missing from her family’s tent at the remote Blowholes campsite.

She was rescued from a property just minutes from her family home in Carnarvon, a coastal town almost 1000km north of Perth.

WA police on Thursday made public an audio recording capturing the emotional moment the four-year-old confirmed the search was over.

"My name is Cleo." pic.twitter.com/xiy59x4kjP

Cleo has returned home with her mother Ellie Smith, stepdad Jake Gliddon and baby sister Isla, and is said to be in good spirits after her dramatic ordeal, seen happy and playing.

A 36-year-old Carnarvon man is being questioned over the suspected abduction. He is expected to be charged later on Thursday.

Police have confirmed the man was twice taken to hospital after self-harming while in custody.

He has since returned to the local police station and is expected to face a magistrate in Carnarvon once charges are laid.

“It’ll probably be later today but there’s still some work that’s being undertaken, some interviews that are occurring,” Superintendent Rod Wilde told reporters in Carnarvon.

“I would imagine that those interviews will conclude today, possibly this afternoon.”

Officers found Cleo, alone in a room and physically unharmed, after breaking into the locked-up house and the remarkable moment was captured by an officer’s body camera.

The accused man was arrested on a nearby street around the same time.

Mr Wilde said police were yet to establish whether Cleo was kept at the property for the entire 18 days she was apart from her family.

Homicide detective Cameron Blaine, who was among Cleo’s rescuers, spent time with the family on Thursday and said the little girl appeared to be holding up well.

“I can only see her from the outside. But from that point of view, I’m amazed that she seems to be so well-adjusted and happy,” he said.

“It was really heartwarming to see that she’s still bubbly and she’s laughing.”

Mr Blaine said while Cleo seemed happy falling asleep in her mother’s arms, “There was one occasion where she asked if she could lay next to mum and have Ellie look at her while she fell asleep”.

“It’s really good to see that she’s adjusted, she’s getting some sleep, she’s playing in the backyard exactly how you would expect,” he added.

Premier Mark McGowan also met with the family on Thursday, describing Cleo as a delightful little girl who spoke to him about her school and her dog.

“It was a lovely experience to meet her … she was a very bright, upbeat, sweet little girl,” he said.

But Mr McGowan did admit to sharing an awkward moment with Cleo when he broke one of her toys.

The Premier visited Carnarvon holding two teddy bears – one for Cleo and one for her sister Isla.

He said they dubbed the teddies Cameron and Rod in honour of the detective who rescued her and the lead investigator on the case, but said Cleo “didn’t seem too enamoured with those names”.

Mr McGowan also revealed to a regrettable moment during the meeting.

“I unfortunately trod on her new Barbie shoes and broke one of them, so I owe her a pair of shoes,” he said.

Police have already confirmed the accused man has no connection to Cleo’s family and was not on a list of known sex offenders in Carnarvon.

He is alleged to have acted alone.

Authorities have been tight-lipped on the exact intelligence that led officers to Cleo’s location. They had been seeking the driver of a car that was seen leaving the Blowholes campsite around the time she was allegedly taken.

“That hasn’t been confirmed as yet,” Mr Wilde replied when asked whether the accused man had been identified as the driver.

“But certainly we would say that that car was significant and it was in the right timeframe.”

He said specialist child interviewers had been flown to Carnarvon and would meet with Cleo when the time was right.

“We’ll sit down with the family and work out the appropriate time,” he said.