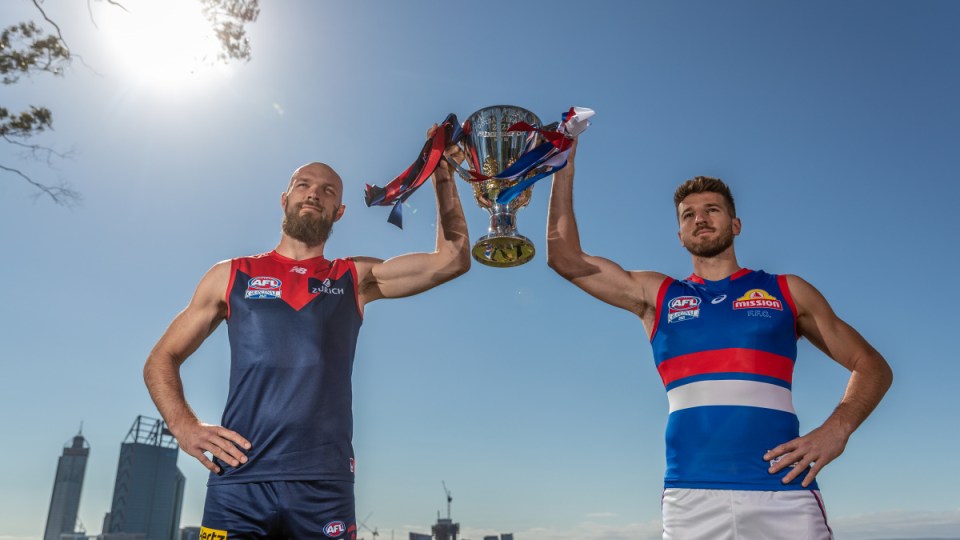 Two Melbourne teams will face off the AFL flag in Perth. Photo: AAP

Perth has put on near-perfect spring weather for its AFL grand-final debut.

The forecast is for some clouds and the temperature around 21C for the first bounce on Saturday at 7.15pm AEST.

The Bureau of Meteorology doesn’t expect any rain as Melbourne and the Western Bulldogs duel for the premiership.

A capacity crowd of more than 60,000 will attend the Optus Stadium clash.

For the second year, the grand final is being contested away from the MCG because of the  COVID-19 epidemic.

Melbourne are trying to break the infamous curse of Norm Smith and end the club’s 57-year flag drought.

The year after Smith coached the Demons to their most recent flag in 1964, he was sacked and then reinstated. Melbourne have made only two grand finals since.

Coach Simon Goodwin started the season under massive pressure but has since led a Demons renaissance.

The Western Bulldogs broke their own 62-year drought five years ago under coach Luke Beveridge.

They were the rank outsiders for their preliminary final, but taught Port Adelaide a September lesson and will have benefitted greatly from the pre-grand final week off.

While Melbourne will start favourites, the concern is they have played only one game in four weeks.

The teams are one-all this year, with the Demons beating the Bulldogs in round 11 by 28 points and the ‘Dogs winning by 20 in round 19.

Their only grand final was 1954 when the Bulldogs – then Footscray – beat Melbourne by 51 points.

‘It means so much’: Celebrities share their abortion stories after Roe v Wade
A COVID-era Perth grand final with AFL immortality, and chance to end a curse, on offer
Today's Stories