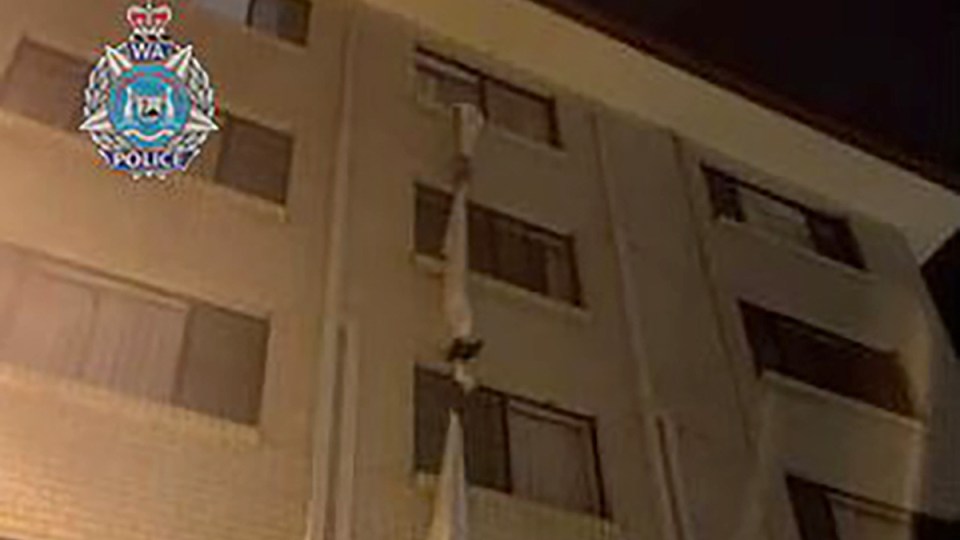 The Queensland man has been charged after his unconventional exit from hotel quarantine in Perth. Photo: AAP

In one of the most daring escapes from hotel quarantine seen in Australia so far, a man tied bedsheets together to shimmy down a building after being denied entry to Western Australia.

The man, 39, arrived in Perth from Brisbane on Monday but was told to leave the state within 48 hours because he did not meet any of the exemptions for entry.

He was taken into hotel quarantine in Riverdale in Perth’s inner-east to await a flight out of WA.

Then, police allege, he climbed out a window on the fourth floor and escaped down a rope made of bedsheets in the early hours of Tuesday, before fleeing.

He was found about eight hours later in Mount Lawley, north of the city.

The man, who later tested negative for COVID-19, was charged with failing to comply with health directions and providing false and misleading information.

Earlier in July, in another daring escape from hotel quarantine, a woman was fined $2500 in Cairns after scaling two balconies and kicking down a door to escape hotel quarantine. She was found shortly after at her mother’s home.

Meanwhile, crew members from an infected cargo ship could be placed into hotel quarantine in WA as authorities investigate whether local workers were exposed to a coronavirus outbreak aboard a separate vessel.

Ten out of 14 crew members aboard the BBC California have tested positive since the vessel docked in Fremantle.

All crew members are isolating in separate cabins with their own bathrooms.

Officials are weighing up removing the four healthy crew members from the ship and placing them into hotel quarantine, allowing the infected crew full access to the vessel so it can be prepared for departure as soon as possible.

The ship docked at Fremantle Port on Monday, allowing crew members to disembark in small groups so they could be tested inside a shed.

They were met by health workers and police, clad in personal protective equipment, and returned to the ship a short time later.