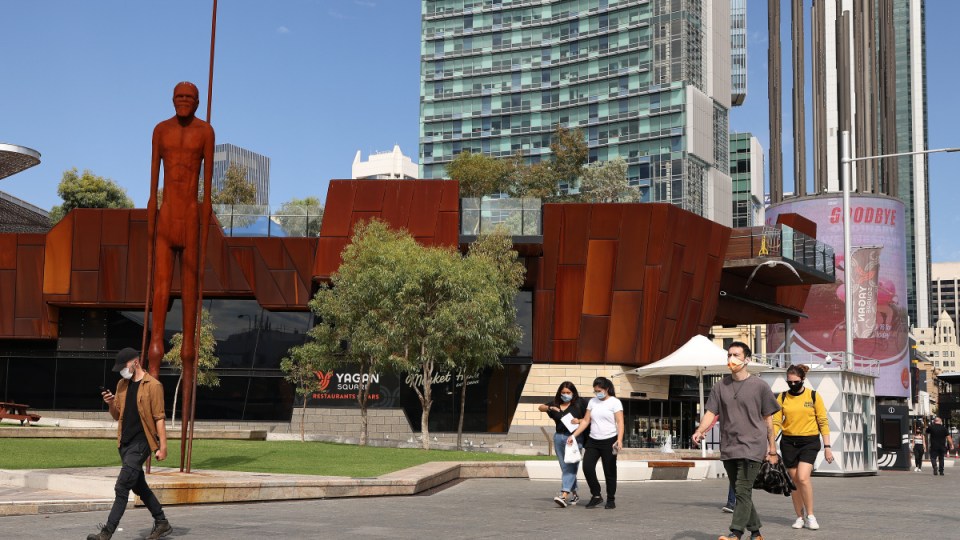 Perth and the Peel region are out of lockdown but mask-wearing is still mandatory Photo: Getty

West Australians are being warned lockdowns will remain a “necessary tool” to limit coronavirus outbreaks despite national leaders agreeing to only use them as a last resort.

More than two million people in Perth and the Peel region regained some freedom on Saturday after a four-day lockdown ended overnight.

No new locally-acquired cases were recorded for the state on Saturday. It still has four active cases in hotel quarantine.

Interim restrictions will be enforced for the next three days including mandatory mask-wearing indoors and outdoors and capacity limits at hospitality venues.

State and federal leaders have agreed lockdowns will only be used as a last resort under a four-phase reopening strategy linked to vaccination rates.

But Premier Mark McGowan says “until we have enough West Australians vaccinated”, they would remain a necessary tool to curb outbreaks.

He described the national agreement on Friday as highly subjective given the contrasting approaches to managing the pandemic taken by different states.

“NSW’s version of ‘last resort’ is get 80 cases and then you have community spread and a lockdown that might go for weeks and weeks, if not months,” he said.

“Our view of last resort is that you listen to the medical advice, you see if there’s any prospect of community spread and try and kill it quickly and efficiently right then

rather than let it drag on and result in potentially catastrophic consequences.”

The decision to lift Perth’s third lockdown in five months came despite one new local case being recorded – that of a 21-year-old woman whose partner, an employee at the Indian Ocean Brewery, tested positive earlier in the week.

He picked up the virus after having fleeting contact with a 51-year-old woman who had contracted the Delta variant while holidaying in NSW.

The 21-year-old woman has been in quarantine since Sunday and authorities do not believe she has been in the community whilst infectious.

Three other cases were detected this week in Perth’s northern suburbs. Of close contacts related to that cluster, 383 people out of 398, or 96 per cent had tested negative, Mr McGowan said on Saturday.

“I can also report dozens of these close contacts have also had their five-day test and returned negative results,” he added.

During the first phase of interim restrictions from Saturday to Tuesday, hospitality venues will be limited to 20 patrons and seated service only.

Anyone who travels outside of Perth and Peel must wear masks and will not be permitted to dine at pubs, cafes and restaurants.

A second phase of less onerous restrictions will be enforced from Tuesday until 12.01am on Monday July 12, when Perth and Peel are slated to return to pre-lockdown life.