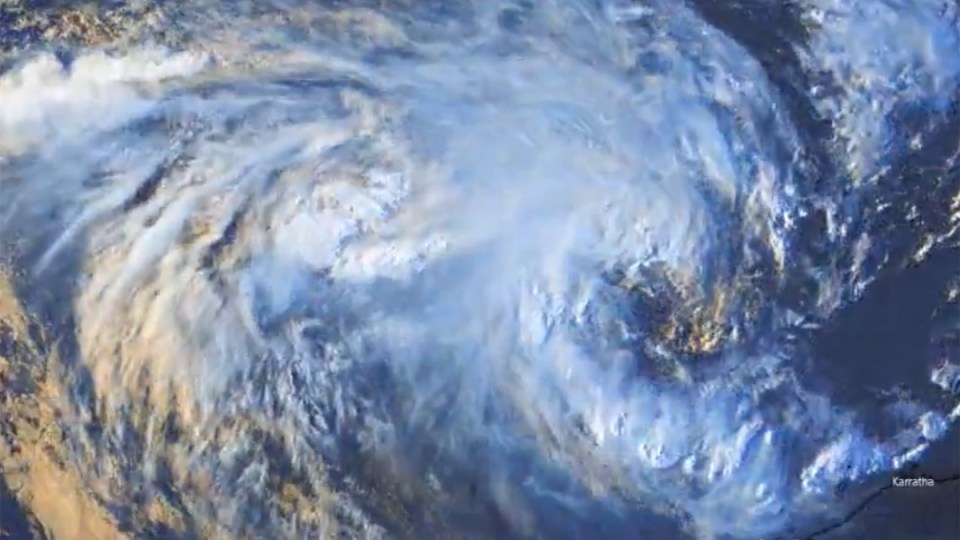 Cyclone Seroja, which is heading for the WA coastline, meets a tropical low off Christmas Island. Photo: AAP

Two tropical cyclones are interacting off the north-west coast of Western Australia, prompting warnings to holiday-makers.

Tropical Cyclone Seroja is tracking south-west at 23km/h and was 525 kilometres north-west of Exmouth early on Friday morning.

The Bureau of Meteorology says it has begun to interact with another system, Tropical Cyclone Odette, located north-west of Seroja.

This rare event is known as the Fujiwhara Effect.

“Tropical Cyclone Odette is only expected to be a short-lived system as it is likely to weaken during its interaction with Tropical Cyclone Seroja over the weekend,” the bureau said on Friday.

“By Sunday, the system is likely to have weakened over waters west of the Gascoyne coast.”

Seroja is expected to make landfall between Carnarvon and Jurien Bay late on Sunday or early on Monday.

A severe weather warning is in place for the west Pilbara and north-west Gascoyne.

Damaging winds with gusts in excess of 90km/h could develop between Exmouth and Carnarvon on Saturday.

Seroja is expected to intensify to a category two or three cyclone over the weekend.

A cyclone advice alert has been issued by the Department of Fire and Emergency Services for people in or near Coral Bay to Geraldton in the Gascoyne and Mid West regions.

Acting DFES commissioner Craig Waters said there were many holiday-makers in the area, many of whom would not have experienced a cyclone before.

“Recent rainfall and flooding has already battered the northern half of WA during the current cyclone season,” he said.

“If you’re in a tent or caravan, you are simply not protected against the damaging winds that may hit the region.

“Some roads in the area are still undergoing maintenance to repair damage from recent flooding events and Tropical Cyclone Seroja has the potential to cause further damage making roads unpassable for days, if not longer.”

The DFES is urging travellers to reconsider their plans and stay up to date with the latest emergency information.

“The size of this potential impact area is another reason to be prepared, because you may need to travel some distance before you are out of harm’s way,” Mr Waters said.

The death toll from mudslides in eastern Indonesia has risen to 119 with scores still missing, as rain continues to pound the region and hamper the search.

Meanwhile, a separate tropical low lying well to the south of Christmas Island could develop cyclone intensity in coming days as it tracks east.

The Bureau of Meteorology said it was possible the two systems would rotate around each other when they got close enough, an interaction known as the Fujiwhara Effect.

Seroja is expected to bring dangerous weather conditions to the west coast on Sunday or Monday.

“This is a rare event for people on the west coast of Western Australia with potential impacts in the area between Coral Bay and Jurien Bay, including Carnarvon, Denham, Kalbarri and Geraldton,” the bureau said.