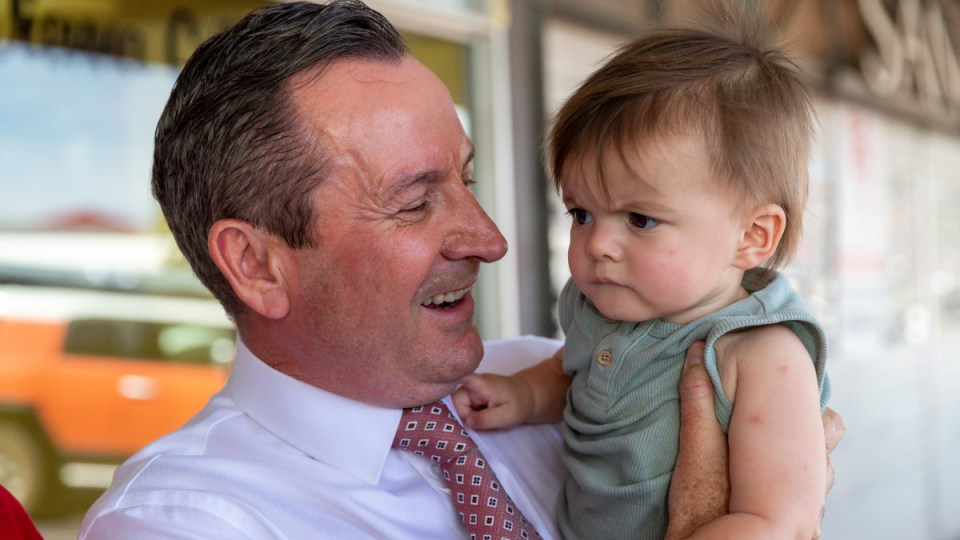 Premier Mark McGowan has made his final pitch to Western Australian voters, saying a re-elected Labor government will remain in the sensible centre.

Labor is on track for a crushing victory at Saturday’s election that could reduce the already-depleted Liberal opposition to a handful of seats.

Mr McGowan continued his charm offensive on Friday, staging a photo opportunity with his parents Mary and Dennis after they drove across the Nullarbor from NSW.

He then jumped on a train heading north to the marginal Labor seat of Joondalup, spruiking Labor’s signature Metronet network and a promise to cap public transport fares.

“Our government has shown over the last four years that we’re stable, reasonable, sensible people that put in place policies that protect the jobs and health of West Australians,” he said.

“If we’re re-elected, that will continue.

“I’ll just continue to be sensible and listen and be reasonable, if we are lucky enough to be re-elected tomorrow.”

The ultra-popular Premier later headed to a nearby shopping centre and was predictably swamped by voters queuing for selfies.

Opposition Leader Zak Kirkup meanwhile, abandoned a planned visit to the regions to campaign in his knife-edge seat of Dawesville.

A new poll published by The West Australian newspaper on Friday predicted Mr Kirkup will become the first WA Liberal leader to lose his seat since the 1930s.

A Labor source said the party had expected Mr Kirkup to hang on in Dawesville based on its internal polling.

Labor is confident of retaining its own marginal seats and picking up others but the weighting given to regional votes makes it virtually impossible to take control of the upper house as the Liberals have warned could happen.

The source said Labor was hopeful of adding a couple of upper house seats and expected One Nation’s two MPs would be retained.

Mr McGowan declared the Liberals didn’t deserve to be rewarded for their performance in opposition, saying their shambolic policy costings exercise had shown a lack of respect for voters.

“It showed they’re not ready for government,” he said.

“Their policies are totally unachievable and unaffordable and yesterday’s efforts showed the inexperience in the Liberal Party team.

“I was opposition leader for five-and-a-half years. I went through two election campaigns. We never did anything like they did.”

The Premier said the absence of Prime Minister Scott Morrison from the campaign showed the parlous state of the WA Liberals.

Mr Kirkup has vowed to walk away from politics if he is voted out in Dawesville.

The 34-year-old admits leading the party has taken its toll but has promised to campaign tirelessly until the polls close.