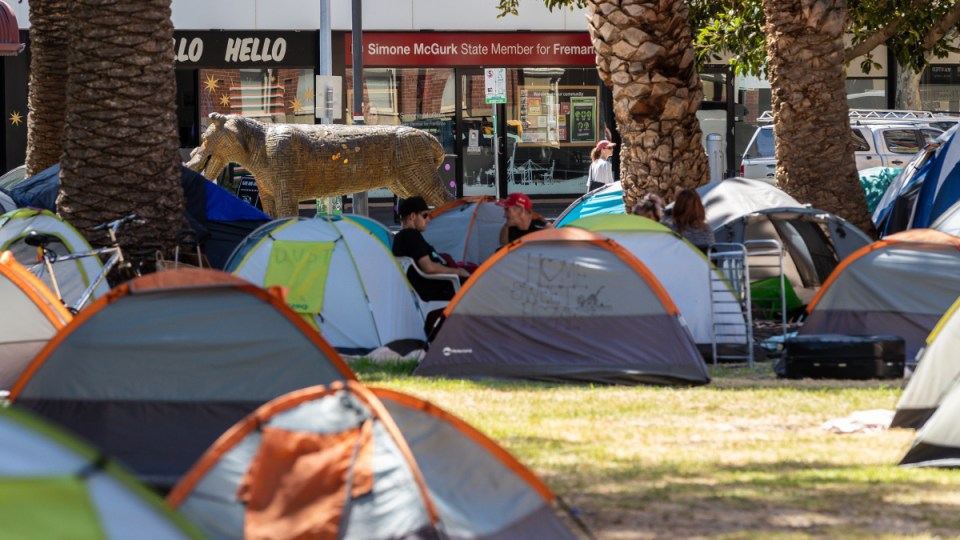 Western Australia’s government has taken control of Fremantle’s Pioneer Park, as it seeks to apportion blame over a troubled homeless camp.

Treasurer and Lands Minister Ben Wyatt has signed a revocation order under the Lands Administration Act removing the City of Fremantle as the management body for Pioneer Park.

Responsibility for the park has been granted to Heritage Minister David Templeman as the government moves to shut down the camp.

Authorities have begun packing up a settlement of tents, with representatives from WA Police and the Department of Communities speaking to the 40 homeless people who remain at the park, ahead of a planned attempt to move them to hotels.

The move has been panned by advocates who say the Labor government has failed to address the crisis in any substantive way.

In a statement on Saturday, the government accused the Fremantle council of failing to withdraw its consent for the occupancy of Pioneer Park in a reasonable time frame.

The council – whose mayor Brad Pettitt is running for the Greens at the March election – has maintained that it has never authorised people to camp in the park, a position it affirmed days ago in a formal motion.

The McGowan government said it had acted in the interest of vulnerable people who were being “taken advantage of by the activists and organisers of the camp”.

“As a result, WA Police together with the Department of Communities and service providers will work together to close the camp and clear Pioneer Park in a safe manner as soon as possible,” the statement said.

The move to clear the camp comes after police linked it to a number of serious crimes, including assaults and child sex offences.

Premier Mark McGowan said the City of Fremantle had advised the government the people at the park were “technically trespassing”.

“What we want to do is get the people off that area cooperatively and sensitively and ensure their needs are met.”

Mr McGowan on Friday renewed his criticism of “anarchists” who he accuses of establishing the camp opposite the office of Communities Minister Simone McGurk as a political stunt ahead of the election.

“They’ve been pulling people out of supported accommodation with false promises and putting them in this campsite,” he told reporters.

“It’s a rotten exploitation of vulnerable and needy people that the organisers have engaged in here.”

In its statement, the government said it had immediately requested WA Police assistance in ensuring trespassers at the park are no longer permitted.

WA Police will work with the Department of Communities and service providers to close the camp and clear Pioneer Park as soon as possible.

People currently living in the park are being offered accommodation by the Department of Communities and its funded service providers.

‘We don’t know where we’re going’

Residents of tent city who are moved today are expected to be housed in hotels for about a week.

Anyone who refuses to leave may be charged with trespassing.

Mary Mogridge, who has been staying at the park, said there was a great deal of uncertainty.

“They just let us know we’re going to hotels for a week,” Ms Mogridge told the ABC.

“But then everyone wants to know what happens after that and if we’re going to be housed or not.

“Everyone will be back on down here if they’re not going to be housed in a week.”

“We don’t know where we’re all going to.”

WA Liberal leader Zak Kirkup told reporters he was pleased to see the Government had “finally” stepped in and “stopped passing the buck”.

“[What] all West Australians would expect, is that those who are vulnerable, and those people without a home, get the support that they need, [and] those that are acting violently, or [engaging in] criminal behaviour, get arrested by police and charged accordingly.”

Mr Kirkup described the State Government’s promise of a week’s accommodation in hotels as “a short-term, bandaid solution”.

“I think it’s important that we simply don’t shift the problem from Pioneer Park to somewhere else in Fremantle or Perth”, he said.

“What we need is a long-term strategy to address the homelessness crisis in Western Australia.”