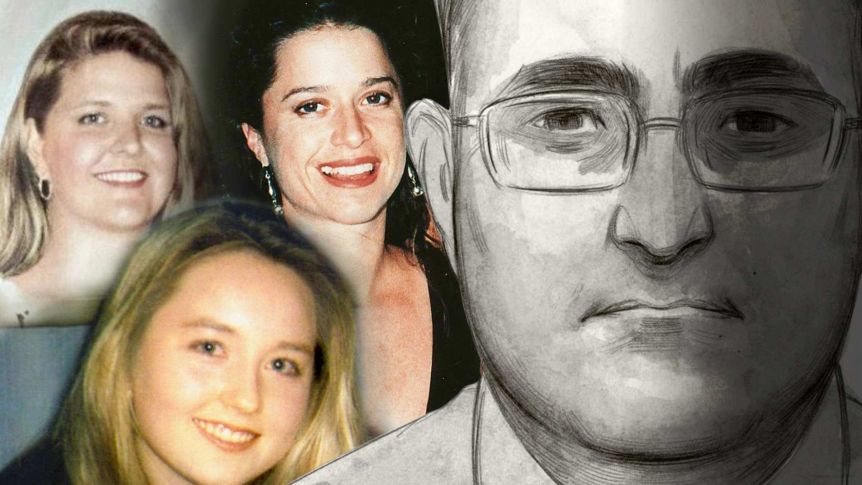 Former Telstra technician Bradley Robert Edwards has been found guilty of the murders of two young women in Perth almost 25 years ago but acquitted of a third in the notorious case that came to be known as the Claremont serial killings.

Supreme Court Justice Stephen Hall today found Edwards, 51, wilfully murdered 23-year-old Jane Rimmer and 27-year-old Ciara Glennon after taking them from the streets of Claremont late at night in 1996 and 1997.

But he was acquitted of the murder of 18-year-old receptionist Sarah Spiers, who was the first of the three women to vanish and whose body has never been found.

The verdicts follow more than 20 years of mystery and speculation over the so-called Claremont serial killings and close the most expensive and longest-running murder trial in WA history.

Edwards had maintained his innocence ever since he was arrested and charged in December 2016.

His seven-month judge-only trial heard from more than 200 witnesses who gave evidence in person and via video link over 95 sitting days, plus scores more whose statements were read into the court.

Those who testified included Edwards’ former wives, friends and work colleagues, as well as friends of the murdered young women who had been with them on the nights they vanished, police and a swathe of expert scientific and technical witnesses.

Nights out turn to horror

All three young women had been out at night with friends in Claremont’s popular entertainment precinct during a 14-month period between 1996 and 1997 when they disappeared.

The bodies of Ms Rimmer and Ms Glennon were found dumped in bushland on Perth’s southern and northern outskirts some weeks after they vanished.

The trial heard Ms Rimmer, a childcare worker, was taken from Claremont by Edwards in June 1996 after he probably offered her a lift home.

After getting her into his work car, he drove her to a secluded part of Wellard, then a semi-rural area in Perth’s south, and slit her throat before dumping her naked body in a patch of bushland near the side of an unsealed road.

Ms Glennon, a lawyer, was also taken by Edwards from Claremont late at night as she tried to get home to her parents after leaving her work colleagues at the Continental Hotel in March 1997.

Again, the prosecution had argued he likely offered to drive her home but instead took her to a remote area on Perth’s fringe, this time at Eglinton to the north.

Just as he did with Ms Rimmer, he cut Ms Glennon’s throat before dumping her fully-clothed body in bushland.

The similarities between the young women’s disappearances and the way the bodies were disposed of were repeatedly highlighted by the prosecution during the trial.

Both bodies were covered with vegetation stripped from nearby trees and shrubs, and both women had sustained similar injuries, including self-defence type wounds to their arms as they tried to fight Edwards off.

Edwards’ DNA was only found on one sample relating to the case, one of tens of thousands of samples collected — and it was a combined sample of two of Ms Glennon’s fingernails.

But that miniscule fragment, “in the order of one fifth of one billionth of one gram” as Edwards’ lawyer Paul Yovich SC put it, irrefutably linked Edwards with the murder.

Mr Yovich’s alternative explanation was it could have got there through some sort of contamination event at state pathology lab PathWest, a scenario comprehensively rubbished by a series of forensic scientists.

The fibre evidence was also damning.

The same blue polyester fibres were found on both women’s bodies and also on the shorts of a 17-year-old girl Edwards admitted raping at Karrakatta Cemetery in 1995.

Those fibres matched uniforms worn by Edwards in his job as a Telstra technician and which were manufactured using a bespoke dye colour known as Telstra Navy.

A combination of 98 fibres were considered critical to the case.

Propensity evidence — the fact that Edwards carried out other attacks on young women — was another part of the prosecution’s case that he murdered Ms Spiers, Ms Rimmer and Ms Glennon.

Late last year Edwards admitted two other sex attacks on teenagers, including the 17-year-old he abducted from Claremont late at night in 1995 and brutally raped at nearby Karrakatta Cemetery.

The horrific details of that sustained assault were relayed to the court in the form of his victim’s statement, as well as graphic testimony from the doctor who examined her afterwards.

In the second attack, Edwards broke into the home of an 18-year-old woman while she and her family were sleeping in 1988, then straddled her as she lay in bed and forced cloth into her mouth.

Two years later he was convicted of yet another attack on a woman, this time on a social worker at Hollywood Hospital whom he ambushed from behind while he was working on the hospital’s telephone system.

But Justice Hall found there was not enough evidence to convict Edwards of killing Ms Spiers, who had left a Claremont nightclub around 2.00am on January 27, 1996, and called for a taxi from a nearby phone box to take her to Mosman Park.

The prosecution had claimed a series of high-pitched female screams heard by several witnesses in the Mosman Park area in the following hour were made by Ms Spiers as Edwards attacked her.

One witness also gave details of a car he saw in the area of the screams — a white Toyota station wagon similar to that driven by Edwards at the time — with its headlights on, parked next to a phone box.

But that testimony, as well as the manner of Ms Spiers’s disappearance, was not enough for Justice Hall to find Edwards responsible for her murder beyond reasonable doubt.

Victims’ families in court for verdict

The families of all three murdered women were in court for the verdict, including the mothers who had last attended on the opening day of trial.

Jenny Rimmer, who has been in frail health, arrived in a wheelchair, while Uma Glennon accompanied her husband Denis and daughter Denise, and Carol Spiers came with her husband Don.

The woman who was raped by Edwards at Karrakatta Cemetery, and the woman attacked by Edwards in her bed at her parents’ home in Huntingdale, were both present.

Edwards’ parents Bruce and Kay were also there, and there was a large contingent of police officers who have worked on the case over the years, along with WA Police Commissioner Chris Dawson.

Members of the public, who began queuing from 4:00am, were mostly forced into a second overflow courtroom in the District Court building and another in the old Supreme Court building, as space was limited in court 7.2.

Public interest in the case remained high throughout most of the trial, even when the evidence became very technical, with the public gallery often near capacity and occasionally full.

But coronavirus and associated social distancing requirements reduced the capacity of the public gallery substantially and for a couple of weeks emptied the court of all but judicial staff, police and media.

It also meant many witnesses had to give evidence via video link instead of in person.

Edwards will be sentenced for the murders, the rape and the Huntingdale assault on December 23.