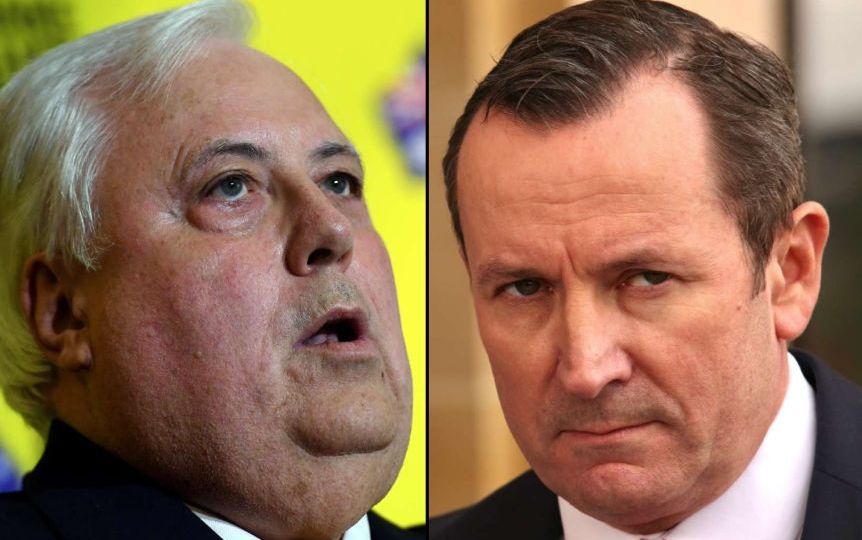 Mr Palmer's case is on of several between him and Western Australia. Photo: AAP

Clive Palmer started his defamation action against Mark McGowan after the WA Premier refused to apologise for statements that allegedly “brought him into hatred, ridicule and contempt”, “damaged his reputation” and caused “injury to his feelings”, court documents have revealed.

In his statement of claim in the Federal Court seeking aggravated damages, the mining billionaire specified six instances between July 30 and August 14 where he alleged Mr McGowan made “grossly defamatory” statements about him.

They included media conferences where Mr McGowan called Mr Palmer “an enemy of the state”, claimed he had wanted to come to WA to promote “a dangerous drug” and accused him of trying to “damage the health of West Australians”.

The reference to the “dangerous drug” related to a statement by Mr McGowan on August 3, when he said Mr Palmer only wanted to travel to WA to promote the drug hydroxychloroquine as “some sort of cure for COVID”.

Mr Palmer alleged the statement suggested he “dishonestly” promoted the drug and that he was seeking to harm the people of WA by providing them with a drug he knew was dangerous.

He claimed the combined statements gave rise to various negative imputations about him, including that he was “a traitor” and “a threat” to Australia and that he “selfishly used his money” to “inflict harm” for his “own selfish gain”.

He is also suing over a Facebook post by Mr McGowan, which he claimed suggested he “intended to steal $12,000 from every man, woman and child in Western Australia” and that he was “so dangerous … legislation was required to stop him”.

Mr Palmer is seeking to “permanently restrain” Mr McGowan from “publishing or causing to be published” any further similar comments.

The court documents revealed Mr Palmer’s lawyers sent a letter seeking an apology from Mr McGowan on August 4, but said the Premier had so far refused to do so and had continued to make “grossly defamatory” statements of him.

The statement of claim said all the comments had brought Mr Palmer “into hatred, ridicule and contempt” and he had “suffered, and continues to suffer, loss and damage to his reputation and injury to his feelings”.

The statement also described the Premier’s comments as “extreme and sensational”.

The documents do not reveal a sum of money that Mr Palmer is seeking, but they do say he intends to call evidence of “special damages” caused by the Premier’s comments.

The defamation action has been launched against Mr McGowan only. The various media outlets that published the comments are not being sued.

It is one of several lawsuits filed by Mr Palmer, with the first prompted by WA’s decision to refuse him an exemption to travel to the state at the height of the coronavirus pandemic.

Since then there has been a war of words between Mr Palmer and the WA Premier, with the row taking a sensational twist when the state government revealed it was facing a $30 billion claim from the billionaire over his iron ore interests.

The government then brought urgent legislation before State Parliament to terminate the claim, but Mr Palmer has already flagged a constitutional challenge to the new law.