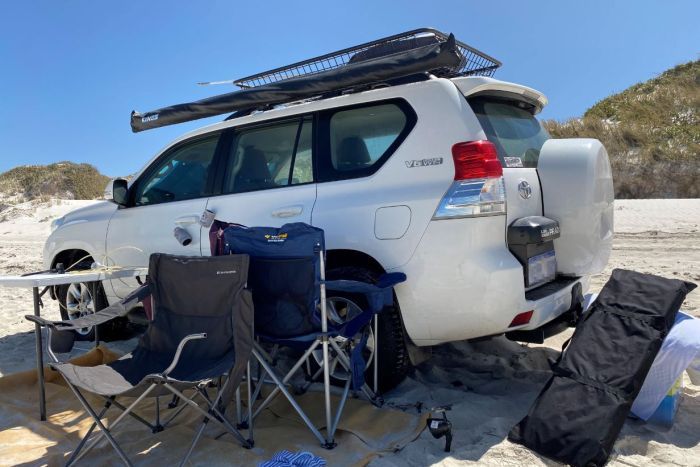 The family was camping on a remote stretch of beach north of Perth. Photo: ABC

An 11-year-old boy and his father are dead and a woman is in a serious condition following a suspected gas leak from a fridge inside a tent on a remote beach north of Perth.

Police and rescuers arrived on the beach on Monday about eight kilometres south of the Wedge Island access road, about 150 kilometres north-west of Perth, after receiving a report a child was not breathing.

Emergency services personnel found a man aged in his 40s and child dead at the scene.

A woman, also aged in her 40s and believed to be the man’s wife, was “in need of urgent medical assistance”, WA Police said.

It is understood the family’s dog also died.

A rescue helicopter flew the woman to Royal Perth Hospital. She was later transferred to Fiona Stanley Hospital, where she remained on Tuesday, in a serious but stable condition.

WA Police said in a statement the deaths were not being treated as suspicious.

“Initial investigation at the scene suggests there may have been a fault with an item of camping equipment located inside the tent the family were sleeping in,” WA Police said.

“This aspect of the investigation is ongoing.”

“I understand there may have been some kind of gas leak from a fridge that was being used in the tent,” she said.

“It is just very tragic. It is a long weekend, so many people would have had a similar experience of camping, be it at Wedge Island or somewhere else, and they would have used potentially similar equipment.

“There really does need to be a thorough investigation into how this occurred.”

Police said the Department of Fire and Emergency Services attended the scene to help with “the safe removal of the camping equipment”.

“Police would like to speak to anyone who was camping in the area at the time, and who have not already spoken to police,” they said.

The president of the local Shire of Dandaragan, Leslee Holmes, said the deaths were awful.

“It’s dreadful … you think of these weekends of everybody having a good time, spending time with their family, kids running around and having a ball and then you have a tragedy like this that’s quite unexplained,” he said.

He said the family was camping in an isolated area with limited access.

“You’re not [supposed] to camp there, there are signs and everything, but unfortunately they may not have seen them and they’ve been probably fairly away from everybody,” he said.

The peninsula on the mainland adjacent to Wedge Island is home to a historic shanty town settlement that pre-dates World War II.

While camping is not permitted in many areas on the mainland, it is a popular holiday destination with tourists and West Australian families.