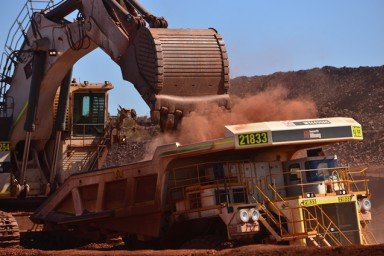 The man was employed by a subsidiary of the mining contractor NRW Holdings. Supplied: Roy Hill

A man has died after sustaining serious injuries on the Roy Hill iron ore mine in Western Australia’s remote Pilbara.

Gina Rinehart’s Roy Hill mine, located 115 kilometres north of Newman and 280km south of Port Hedland, is the country’s largest privately owned mine.

NRW Holdings confirmed the man, who was an employee of its subsidiary DIAB Engineering, sustained serious injuries following an accident on the site early Monday morning.

The man was flown to Perth by the Royal Flying Doctor Service but died in hospital overnight.

In a statement released to the ASX, NRW Holdings said it was “devastated by the loss”.

“[We] extend our sincerest condolences to his family, friends and colleagues,” the statement said.

“NRW’s number one priority is the safety and well-being of our workforce.

“Support has been extended to the worker’s family and his colleagues.”

The statement said NRW and DIAB were assisting Roy Hill and the relevant statutory authorities with investigations into the accident.

Roy Hill declined to comment, but in a statement said it was “saddened” by the incident “during which an individual was fatally injured”.

The WA Department of Mines, Industry Regulation and Safety have been contacted for comment.

A report is being prepared for the Coroner.