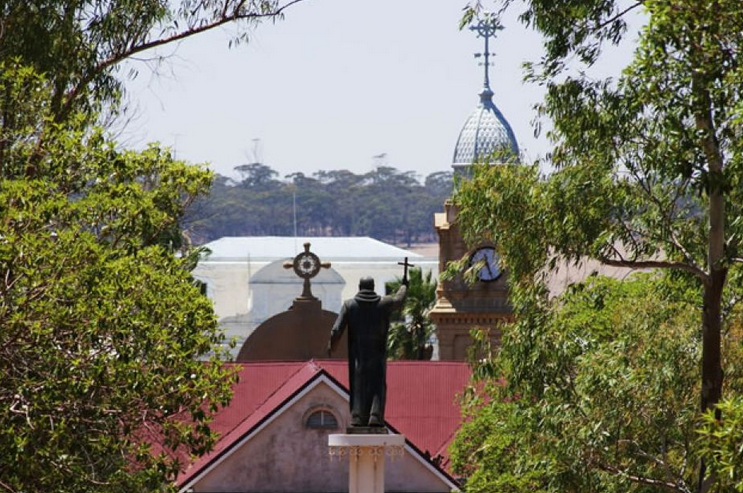 In the Benedictine Community of New Norcia, one priest in fives was accused of sex abuse.

A spiritual sanctuary for Benedictine monks and an enduring tourist attraction, New Norcia is also a town haunted by its past.

A two-hour drive north of Perth, the town of New Norcia – Australia’s only monastic town – has been run by Roman Catholic monks since its establishment in 1847.

Thousands visit each year drawn to its unique history, local produce and Spanish-influenced architecture amid the parched Wheatbelt terrain.

For others, it’s a place of trauma.

For more than a century, the town hosted institutions – misleadingly labelled “orphanages” – for Aboriginal boys and girls, as well as boarding schools for white children.

They were overseen by the Benedictine Community of New Norcia, which was identified by the Royal Commission into Institutional Responses to Child Sexual Abuse as one of the nation’s worst historical child sex offenders.

The commission found one in five Benedictine priests between 1950 and 2010 were alleged child abusers – triple the national average for Catholic institutions.

Some survivors believe the present-day Benedictine Community has failed to sufficiently acknowledge the abuse that occurred in New Norcia.

“I would cry at night because I wanted to be at home with my family.

“There was no love, no compassion from the nuns. They were hard, they were unforgiving.”

Data collected by the royal commission in 2017 showed the Benedictine Community reported 65 claims of child sexual abuse, resulting in a total payment of $869,000. The highest number of claims made against a single alleged perpetrator was 26.

“I’m so grateful to the royal commission because I finally got to tell my story, and otherwise I would have taken it to the grave,” Ms Phillips said.

Prior to being sent to New Norcia, Ms Phillips says she was abused by a priest in her nearby hometown of Goomalling.

Now 59 and a doting grandmother, she still struggles with her time at St Joseph’s where she was put to work and given only basic schooling.

“It’s followed me all my life,” she said.

“I’ve had the most wonderful and happy times when my granddaughter was born but it was always in the back of my head.

“I thought I was being taken there to be educated, to make me a stronger person for the world. But that’s a load of bulls**t, because they did feast on kids like myself.”

Her sister, Lesley, who struggled with rheumatic fever as a child, also attended St Joseph’s. As an adult, Lesley “hit the drink” and rarely spoke about her experiences, dying at just 34.

At the New Norcia museum, a permanent exhibition paints a largely positive picture of life at St Joseph’s in the building that housed the girls until its closure in 1974.

Tucked towards the back, a poster acknowledges some of the girls having experienced “a material and human environment” in which unspecified “neglect and abuse” occurred.

The Abbot of New Norcia, Father John Herbert, declined to be interviewed but provided written responses to a series of questions.

He said the New Norcia Aboriginal Corporation had extensive input into the museum exhibition, as well as hosting an annual reunion and healing weekend which included an acknowledgement and apology from the Benedictine Community.

He added that the community intended to establish a “Rock of Remembrance” memorial alongside the church abbey explicitly recognising the victims of child sexual abuse.

Western Australia has been slow to acknowledge elements of its history, particularly when it comes to the treatment of indigenous Australians.

Substantial efforts have only recently been made to recognise the grim past of the iconic Rottnest Island, where hundreds of Aboriginal men and boys from across WA died and thousands more were imprisoned in dire conditions.

Until its closure in mid-2018, one of the main prison buildings dating back to 1864 was still being used as holiday accommodation.

There have also been calls for more substantive recognition of the Pinjarra massacre south of Perth in 1834, which saw dozens of Noongar men, women and children slaughtered.

For survivors of abuse in New Norcia, plans for a public memorial are welcome but long overdue.

“I want something there to acknowledge it but it will never bring me comfort, because that place took my being a kid,” Ms Phillips said.
“It damaged me for life.”