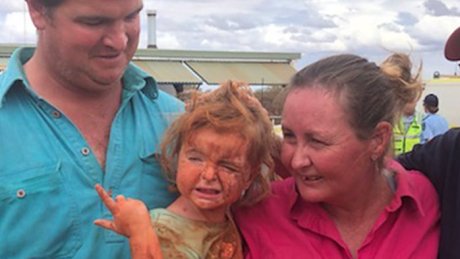 Matilda and her dog were found alive by a police helicopter. Photo: WA Police

A three-year-old girl and her Jack Russell dog have been found almost 24 hours after they wandered away from their home on a 368,000-hectare pastoral property in Western Australia’s flood-affected Pilbara region.

WA Police confirmed Matilda had been found safe and well about 3.5 kilometres south of the Noreena Downs Station homestead where she lives.

Authorities were seriously concerned for the girl’s safety as the station, about 150km north of Newman, was recently inundated with rain from ex-Tropical Cyclone Blake, causing flooding and road closures.

The heavy rain filled a number of creeks surrounding the property and police described the environment in the area as “very challenging”.

“We think that Matilda had walked through a creek bed, which was close to her house [but] that creek rose due to heavy rains in the area, trapping Matilda on the other side of the creek from the homestead,” he said.

“Her panicked parents did all they could. We had helicopters brought into the area, station people from around supported it, police, local SES, all of those support people.

Praise for girl and for dog

Superintendent Massam said everyone involved in the search was elated when Matilda was found.

“It’s just an amazing feeling. I’ve had my team out there on the phone just elated, I could only imagine how excited the family was,” he said.

“Growing up on the station, I’m sure she’s a free spirit and her backyard is probably millions of acres.

“It’d rained out there, the station was inundated with water and, you know, very fortunately she didn’t succumb to some of those creeks that we were very concerned about.”

“That little puppy stayed with her that whole time, alongside her through what was an unsheltered evening,” he said.

“That little dog will be the toast of the station tonight.”

WA Emergency Services Minister Fran Logan praised everyone involved in the search, including State Emergency Service volunteers from Newman who arrived first and searched through the night.

“It was a helicopter that spotted her, which was fantastic and they immediately went to where she was … and she was there, tired, probably cold after last night as well and the dog was with her.

‘It’s a great story and really congratulations to everyone and I’m sure her parents must be overjoyed, she’s fine, well and back at home.”

Superintendent Massam said the support from industry was also amazing.

“We had helicopters donated by surrounding stations, industry, BHP, FMG. It was just an amazing push for resources to assist,” he said.

The search came exactly one year after the nearby Pilbara town of Tom Price was rocked by the loss of mother-of-two Felicity Shadbolt after an extensive air and land search.