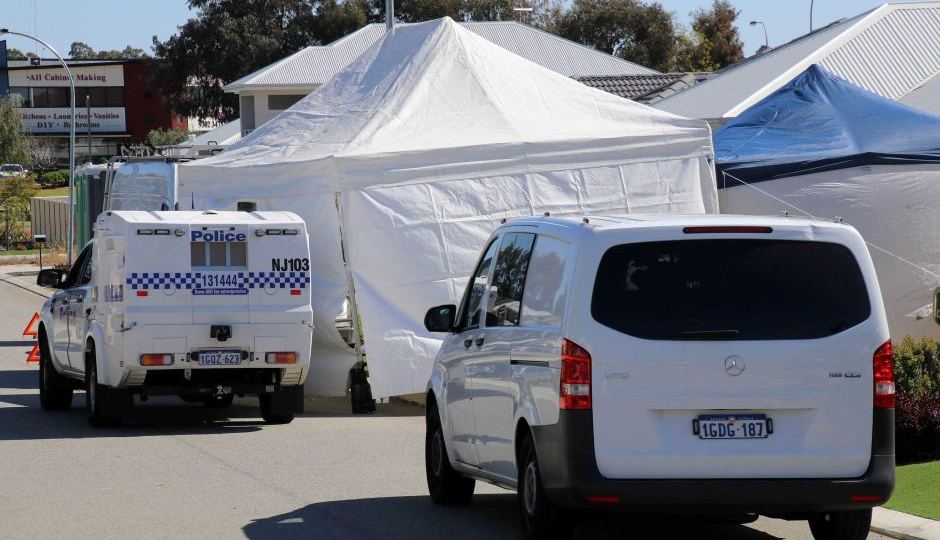 The 38-year-old mother of two young sisters found dead in their Perth home on Friday has been charged with two counts of murder.

The woman, who police have not named, was being treated for self-inflicted wounds after she was found at Mullaloo Beach on Friday night.

She will face Stirling Gardens Magistrates Court on Monday.

The sisters, 10-year-old Mia and six-year-old Tiana, were found dead in the family home in the northern suburb of Madeley.

It is believed the girls were found dead by their father when he returned home from work late on Friday afternoon, and emergency services were called by neighbours.

Police have spent a second night at the scene collecting evidence.

The girls’ mother was too ill to be interviewed initially, and police said her injuries were not life-threatening.

Assistant Commissioner Paul Steel said on Saturday the cause of the children’s deaths was still being determined by police and medical experts.

He said the girls’ father was helping police, and they were providing support to him.

As police continued to gather evidence at the house, mourners arrived with flowers.

One couple, carrying a large bouquet of pink roses, was escorted to the house by police.

Another woman, who said she did not know the family, tried to bring roses to the house.

She was met at the police block and asked to leave her tribute nearby.

Family friend Philip Couper, whose daughter Mia was best friends with the older of the two sisters, said the school community was very close-knit and everyone was in a state of shock.

“It’s just a tragic, tragic accident that has just shocked and broken our community,” he said.

He said the two sisters had been very close.

“They were inseparable. They were always together,” he said.

“[The eldest girl] was like the big sister to everyone at school. No matter what, every day she’d give my daughter a hug.

“She’d always look after them. She’d take them under her wing.

“She was very quiet as a person, but very, very caring, and it was such a shock to hear … about the tragedy.”

An emotional Mr Couper, whose cousin Shannon Sanderson was injured in a zipline accident in Queensland last week in which her husband died, said it had been a distressing 24 hours.

“My wife broke down when she found out who the children were. My daughter as well,” he said.

“My wife and I found ourselves in the position of having to answer questions that we never thought we would ever have to answer as parents.”

Asked how his daughter was coping, Mr Couper said: “She just doesn’t know how to comprehend it. She’s asking questions.”

“We can’t fathom going to school tomorrow when the two kids aren’t even going to be there.”

He said he and his wife had “no inkling” that anything was amiss in the family.

“As a community, we would like to find out what went wrong because we need to stop this from ever happening again. We see far too much of it,” Mr Couper said.

Messages from those who knew the family were posted on social media overnight, with other parents also describing having to break the news to their children.

“He is devastated as I’m sure a lot of our families would be,” one mother wrote of her young son’s reaction.

“She was an absolutely beautiful girl. We have been so lucky to have had her in most of [my son’s] classes.”

The Education Department said in a statement it would provide support at the girls’ primary school.

“In any situation where students and staff may be distressed, support will always be provided as needed,” a spokeswoman said.