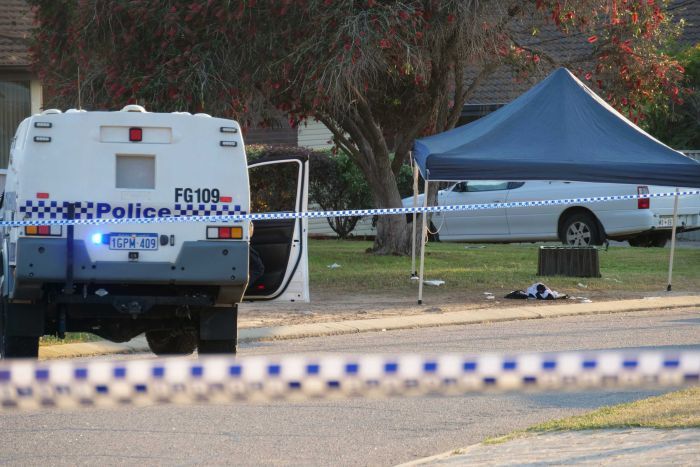 The scene in Geraldton on Tuesday night, after 29-year-old Joyce Clarke was shot by police. Photo: ABC

The death of a troubled Aboriginal woman who was shot by police in Western Australia’s Mid West has prompted her friends and family to ask why police didn’t use non-lethal force to deal with her.

Joyce Clarke, 29, was reportedly armed with a knife when a constable shot her about 6.15pm on Tuesday on a residential street in Karloo, Geraldton.

Ms Clarke was taken by ambulance to Geraldton Regional Hospital but later died.

Geraldton Mayor Shane Van Styn said Ms Clarke’s mental health issues were well known to the community, and she had been let down by systemic failures and a lack of resources.

It is understood Ms Clarke had been released from prison only recently. She leaves behind a seven-year-old son, who lives with a relative.

Her family and friends gathered outside the local police station on Wednesday to protest at what they said was the excessive force used by police.

“[She] was a lovely girl, she might have been on drugs, but she was a lovely person,” Ms Comeagain told the ABC.

“There’s no need for that. Where were the tasers? Where was the pepper spray? She would have been still here today.”

This is the biggest demonstration I’ve seen in Geraldton. The crowd is making their feelings towards police known as they pass the station. Investigation is still ongoing. @abcnews @abcperth #geraldton pic.twitter.com/VjhloOhzeH

Cr Van Styn said Ms Clarke’s family had called on locals to rally again on Thursday morning to show their support for her and call on the WA government to fund acute mental health facilities.

There are currently none in Geraldton and people suffering episodes are sedated and flown to Perth, which is 400 kilometres away.

Geraldton Police enforce a liquor restriction in town due to the “high emotions” from the events today until Saturday. Customers Ltd to light beer, one bottle of premium wine and sale of bottled spirits, cask wine, full strength beer and fortified wine is prohibited. @abcperth pic.twitter.com/bYFEetj6zd

Local police have introduced temporary liquor bans in Geraldton until Saturday. They will remain in place due to “high emotions within the Geraldton community” following Ms Clarke’s death.

“It’s as harrowing as it gets,” Mr Georgatos said.

‘Where were the tasers?’: Grieving relatives of dead woman question police