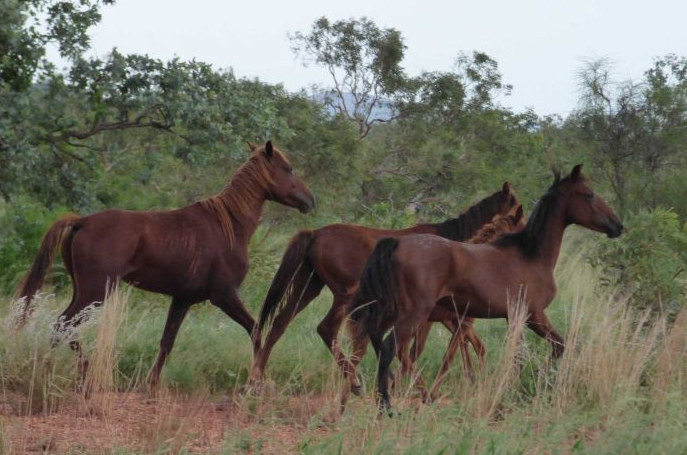 Feral horses have roamed the bush for well over a century but are now being slaughtered in their thousands. Photo: ABC

Hundreds of them are culled across Western Australia’s northern rangelands every year, yet the feral horses of the Kimberley fail to attract the same interest as the brumbies of the eastern states.

But a vet has warned that secrecy surrounding culling may impact animal welfare, and there are others that believe horses can bring benefits if properly managed.

The Department of Primary Industries and Regional Development does not have an estimate for the number of feral horses in the Kimberley.

But publicly available annual reports indicate that the Kimberley Rangelands Biosecurity Association worked with the department to cull more than 3,000 horses between 2014 and 2018.

Independent veterinarian Jordan Hampton has been consulted in the past over the animal welfare aspects of culls in both the Kimberley and Pilbara region.

He said the controversy had made it hard to gather data and apply science-based solutions to ensure the best welfare outcomes.

“Because of a lot of the contention there’s been a lot of secrecy around horse management generally, and certainly aerial shooting programs,” Mr Hampton said.

“We’ve been able to collect some data from a few parts of Australia over the past few years to try to quantify some of the animal welfare outcomes, but there’s still quite a lot of uncertainty about how those outcomes might vary.

“We don’t really have a good baseline of scientific knowledge at the moment to talk about how to improve them.”

In a statement, the department said feral horses were a declared pest under WA legislation because of the impact they could have on native vegetation, soil erosion, and reducing food sources for native and domestic animals.

It said aerial culling was the most practical and humane control method for remote or inaccessible areas.

Mr Hampton said aerial culling was usually carried out because population numbers needed to be reduced immediately, often to help biodiversity or for the welfare of the horses themselves.

“It’s cost effective compared to other methods of population control and it gives shooters the ability to very quickly follow up to any animals that are wounded, and that’s an advantage to overground shooting,” he said.

But he said it came at a cost.

Horses can become distressed as they are chased by the helicopter, and there was always a chance that the animal would not be immediately unconscious after it is hit.

“If we want to keep the horses alive, it’s the kindest thing to do,” she said.

“I would like to see a big brumby sanctuary. People would love to go and see them.. It would be a fabulous tourist project.”

But Dr Hampton said while fertility control sounded viable, it could take up to a decade to affect numbers.

“Long term it could be a reasonable option — if you have a small and isolated population and plenty of resources — but in the Kimberley I’d say it would be close to impossible with the resources that are currently allocated to wildlife management,” he said.

“The size of the landscape, the remoteness, the relatively small human population and to be honest the relatively small media attention that’s devoted to the north-west of Australia compared to more populated places makes it a pretty different playing field for what resources are available, what staff are available, and what sort of level of social concern is involved.

“It’s very difficult to manage animals in an extensive landscape using methods other than helicopter-based mustering or shooting. In the short term I can’t see many other appealing options.”

Kachana Station’s Chris Henggeler believes large herbivores can play a part in assisting the rangeland environment, provided they are managed.

His donkey herd roams in areas where domestic cattle will not, helping to keep down vegetation that smaller, native mammals can’t process.

“What we need to understand is that these herding herbivores originally had predators. That’s why herds eventuated in the first place,” he said.

Tight-knit herds ensured the animals were not selective about what they grazed, he said.

“These herding herbivores, functioning as they should, will actually mulch, evenly fertilise and prune plants and then they’ll move off.”

He said it left the landscape visually unappealing but could lead to increased activity for soil organisms.

Grazing large herbivores could potentially take away the reliance on fire as a management tool, he said, as long as herd numbers remained under control.

“I’m trying to find solutions for country that cannot feasibly be managed conventionally,” he said.

“Should we value something that can save us money down the line? Or are there unexplained ways that can turn a problem into a solution?

“Nature’s not static. So things that may have been very applicable 40 years ago and even 30 years ago, in a dynamic changing landscape, that may no longer apply.”