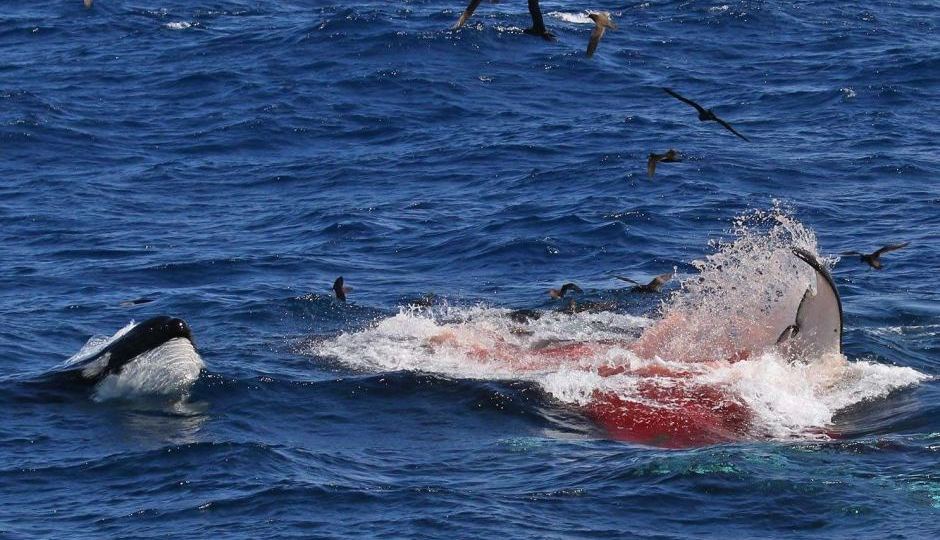 Sharks and seabirds were attracted to the kill off the coast of Bremer Bay. Photo: Kirsty Alexander/ABC

What started as a tour like any other on WA’s south coast quickly turned into a scene of slaughter at the weekend, demonstrating the awesome power of the apex predator of the ocean.

Tourists witnessed the dramatic sight on Saturday when a group left from Bremer Bay to a usual whale-watching site at the edge of the continental shelf, 60km out to sea.

They backed off to make sure the animals were comfortable with the boat’s presence, when they noticed a group in the distance beginning to porpoise.

“So what they’re doing is they’re basically creating … these huge bow waves as they rocket out the front of the swell,” she said.

“They do that because it’s a quick way to travel really. They’re using the forward motion of the waves and they were absolutely flying.”

As the boat moved towards them, killer whales came in from all directions.

“They really began to pick up speed, but towards both of our port and starboard sides, and behind us in our wake we could just see more and more animals rocketing in towards this central point that was just beyond the horizon,” Ms Alexander said.

She said three pods totalling about 30 killer whales were in view when there was an eruption of white water.

“We knew they had something,” she said.

“As we watched we could actually just see the blood pool form on the surface, so [we knew] they did have a large mammal at that stage.”

Wolves of the sea work together to take down prey

Flocks of seabirds and several sharks were attracted to the kill – thought to be a species of beaked whale – as the mammals took off chunks of meat up to two metres wide.

Ms Alexander said it was not unusual for orca pods to work together to take down their prey.

“One of the key features for these guys in terms of their success, being literally the apex predators of the ocean, is their communication and their co-operation, so what one couldn’t do, these guys certainly could,” she said.

“They’ve been dubbed the wolves of the sea, and they certainly have that similar social structure and cooperative hunting technique.”

Ms Alexander said while she had come across killer whales with their prey before, she had never seen an attack carried out so quickly.

“Generally it does take a bit of time for them to actually wear the animal down. That can sometimes be an hour or two,” she said.

“They do that by ramming for example, or if the animal tries to surface to breathe they will take turns to try and push it under, and they’re obviously biting the animal at the same time, particularly fins and so forth to disable it.”

She said the experience had been confronting for some tourists and awe-inspiring for others.

“It really is that feeling of being in a wildlife documentary, that you get all of your senses engaged – you can see it, you can hear it, you can smell it,” she said.

“Part of my job is to help people understand the biology and the ecology of these animals and all the other animals that we see, but there wasn’t much explanation required when it happened right in front of you.”

Killer whales live up to name in bloodbath off WA