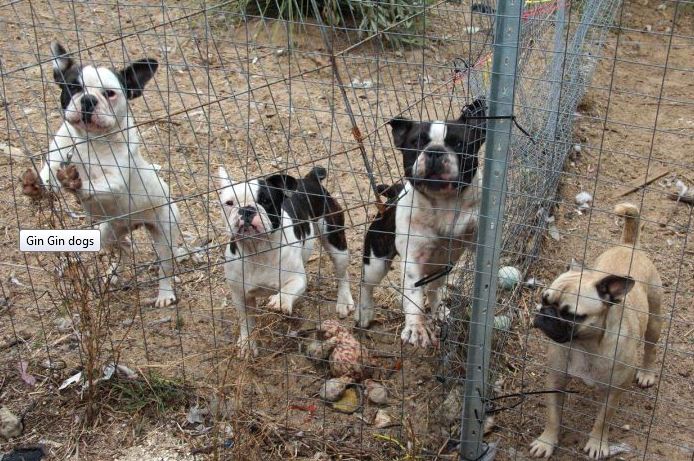 French bulldogs in their enclosure at the alleged Perth puppy farm. RSPCA photo

The RSPCA has removed 46 adult dogs and puppies and 20 cats and kittens from a property in Gingin, north of Perth, suspected of housing an illegitimate breeding operation.

The alarm was raised when several dogs as well as a dog carcass where spotted on the semi-rural property.

An RSPCA inspector attended and uncovered what appears to be a large scale breeding-operation for designer pets, including French bulldogs, chihuahuas, maltese, shih-tzus as well as sphynx and munchkin cats.

The animals appeared to be in good condition but will be fully assessed by veterinarians in coming days.

Five animals were removed on Thursday and the remainder were collected on Friday and brought to the RSPCA Animal Care Centre in Malaga to be assessed for suitability to be adopted.

A spokesman for the RSPCA said it was an enormous number of animals to flood their re-homing program at one time.

However he said it was uncommon to receive such boutique breeds, which should make finding them new homes less onerous.

Chief Inspector Amanda Swift said the conditions the animals were being housed in were less than ideal.

“These are designer breed dogs and you would expect them to be living inside somebody’s very loved house in the air conditioning,” she said.

“These animals were being kept outside in hot sandy conditions in pens that were far too small, with lots of excrement, dirty green water and no fresh bedding.”

“I think most people would be horrified if they thought the beautiful puppy they were bringing home, it’s mum was being left behind in these conditions.”

She said the owner would face fines from the Shire of Gingin for having too many animals and unregistered animals.

Ms Swift said the owner was, however, cooperative and grateful for the RSPCA’s assistance.

While Western Australia has little regulation surrounding dog breeding, the by-laws of the Shire of Gingin prohibit residents from owning more than two dogs without prior approval.

In order to avoid paying huge fines, the animals’ owners were ordered to surrender all but four of the animals. Six others are being held by the Shire of Gingin which the owners can apply to have returned at a later date.

The WA Government has flagged changes to the Dog Act including mandatory sterilisation of all animals.

In 2012, 50 dogs were seized, including a dozen pulled from a dank underground bunker in an unrelated puppy farm just outside the Wheatbelt town of Kellerberrin.

The RSPCA says it is part of a consultation group working with the WA Government to develop laws requiring centralised registration systems for puppies at point of sale and adoption.

They also want mandatory standards introduced for dog breeding, housing, husbandry and transport, and a targeted inspection and enforcement scheme.