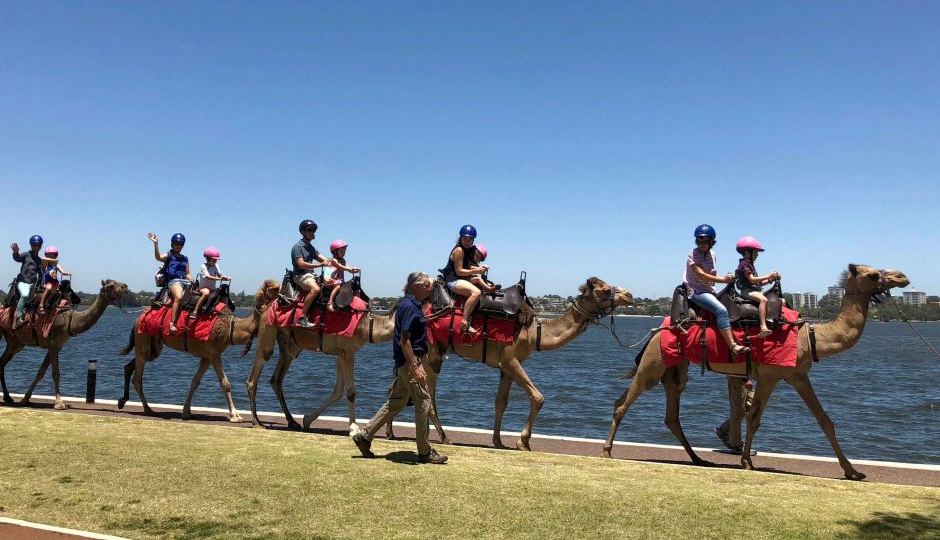 Camels on the Swan River offer an elevated way to see the city. Photo: Supplied/ABC

So it’s not sunset on Cable Beach, but the operator of a new camel tourism venture along Perth’s foreshore hopes it becomes a quintessential city experience.

Jon Warren has taken a small caravan of wild camels, caught on the Nullarbor Plain, and trained them to take tourists on a ride through Elizabeth Quay and along the Swan River foreshore.

The cameleer was inspired to start the business about 18 months ago when he heard Perth was about to get a glut of new hotel rooms and tourists in the city would need something to do.

“Obviously they are iconic in Broome,” he said.

“But most of the camels actually came in through Fremantle and were used extensively in Western Australia from the late 1800s through to the early 1900s.”

Thousands of camels were imported into Australia from the 1870s onwards.

They were widely used in the pastoral industry as well as in the construction of railways.

But when they were no longer needed they were set free in the bush.

There are now hundreds of thousands of feral camels living in central Australia.

Mr Warren has 22 camels at his property in the Swan Valley, seven of which have been successfully trained.

“All our camels were caught wild; most of our camels came from the Nullarbor Plain and some from South Australia.”

It takes about 12 months of training daily to get a wild camel to the point where it can safely work as a tour guide.

“Some camels will never make it, they are just too flighty and some are too obstinate, but others can be trained reasonably quickly,” Mr Warren said.

The camels, according to Mr Warren, seem to be enjoying their new careers.

“Once they have had their feed they just walk on to the trailer pretty calmly and come into town.

“Then we saddle them up and they are ready to go to work.

“They love it because every time someone gets off … we give them carrots and we take photos of the riders giving them the carrots.”

It’s a dramatic change of scenery for the camels, which are now padding around on pathways and cobblestones instead of the desert.

But Mr Warren said he was confident they could handle it.

“I don’t think we have much to worry about with their feet,” he said.

“It’s much hotter where they come from, also much colder, so they are used to extremes of weather and very harsh conditions.”

So far interest has been healthy from both locals and international visitors.

Mr Warren said the opportunity to get a photo of the incongruous sight of a camel at Elizabeth Quay and among city buildings was proving popular since the venture started a month ago.

“When the Ashes were on we had quite a few English people.

“We also have people from China, Singapore, Malaysia and India and quite a few Canadians, which was surprising to me.

“A lot of people are walking past … and saying, ‘when I have half an hour I’ll do it’.”