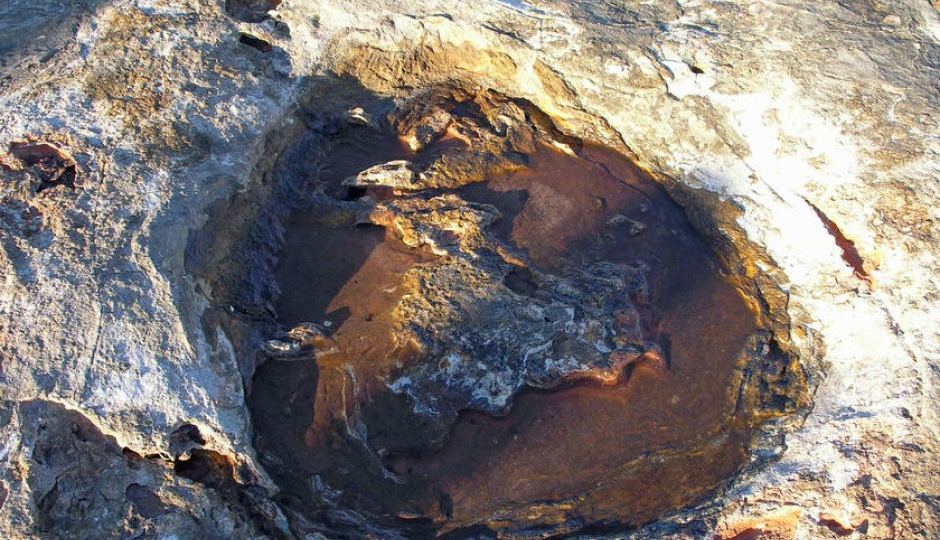 Footprints scattered around the Dampier Peninsula coastline are the only evidence that stegosauruses once roamed the continent. Photo: ABC

Evidence of life from 130 million years ago is nestled on the north-west tip of Australia in the form of some of the world’s best dinosaur footprints.

Nowhere else can you see tracks from prehistoric beasts so clearly, yet no fossilised bones have been found.

Steve Salisbury says the short answer is: we’re not 100 per cent sure.

He is one of the key palaeontologists researching in the Kimberley.

“It’s a good question, because I wonder that all the time,” Dr Salisbury said.

Although he does not have a definitive answer, he theorises that it is due to the chemistry in the Kimberley sandstone and sediment.

It just has not been hospitable for the preservation of bones for 130 million years.

“There may well have been bones preserved in them but they haven’t fossilised or persisted as fossils,” Dr Salisbury said.

“In other areas when there are far fewer dinosaurs we have lots of different dinosaurs and bones.”

How are bones fossilised?

First, you need a sedimentary environment — like a swap, riverbank or a lake — because bone has to be buried very quickly so it is protected and preserved.

But the buried bone is not the same as a fossil and it is not going to last 130 million years ready to be found by a palaeontologist or an unsuspecting tourist.

The organic composition of the bone – like the collagen – needs to stabilise and remineralise, otherwise it will break away and decompose.

Dr Salisbury said he believes the Kimberley sandstone is not facilitating this process of fossilisation.

“I’m sure there were bones in it and a lot of dinosaurs died but there’s something in that sediment – I don’t know what that is – that’s just not taking it to the next step,” he said.

It is a different process for footprints.

The land where the dinosaur is having a stroll needs to be “quite elastic” when it is moist to leave a good impression.

The layers harden and, before they get any chance to erode, are buried with more sediment.

A footprint tells a thousand words

Despite the lack of body fossils, footprints can tell us a lot about the fauna living in the Kimberley millions of years ago.

Although Dr Salisbury hopes bones will be found, he is a huge fan of footprints.

The most important thing that they tell us is exactly where a dinosaur was and what it was doing, Dr Salisbury said.

“Because you know the dinosaur walked there and was heading that way and it was moving this fast and it turned that way and there might have been another one next to it,” he said.

“With bones you might get a whole skeleton, which is great, but most of the time you get a tooth or a toe bone or a rib and it may have travelled a long way from where the animal lived. So you don’t get a lot of direct evidence of the living animal.”

She said finding body fossils would add certainty to what type of dinosaurs lived in the Kimberley.

Where can I find bones in Australia?

The best body fossils of dinosaurs have been found in Queensland and Victoria, Dr Syme said.

That is because these areas were prime sediment real estate millions of years ago.

“Those are rock units that were deposited in rivers and along the edges of an inland sea, called the Eromanga Sea, which covered the inland of Australia around 100 million years ago,” she said.

Dr Syme said most body fossils were found because people simply stumbled upon them, accidentally.

So is there hope a body fossil will be found in the Kimberley?

There is still hope

“It would be the jackpot!” said Michelle Teoh, secretary of Broome’s Dinosaur Coast Management Group.

She works with a handful of other dedicated volunteers at the not-for-profit community organisation spreading information about the tracks and advocating for their care and preservation.

They are actively looking for body fossils, despite not having yet hit the jackpot.

“If we found some it would really elevate the profile of the dinosaurs’ significance,” she said.

Ms Teoh said they had received calls from tourists and enthusiasts who believe they had sighted a body fossil.

“Four months ago someone – who is a local and goes down to the beach regularly – gave us a call and described (a possible bone fossil) nicely.

“We got a little bit excited, but unfortunately it didn’t turn out to be real,” she said. “It was probably like a petrified wood”.

“All I can say to people is ‘keep looking, give us a call, we’ll be there, most definitely be there’.”

The Kimberley is home to the best dinosaur footprints, but no body fossils