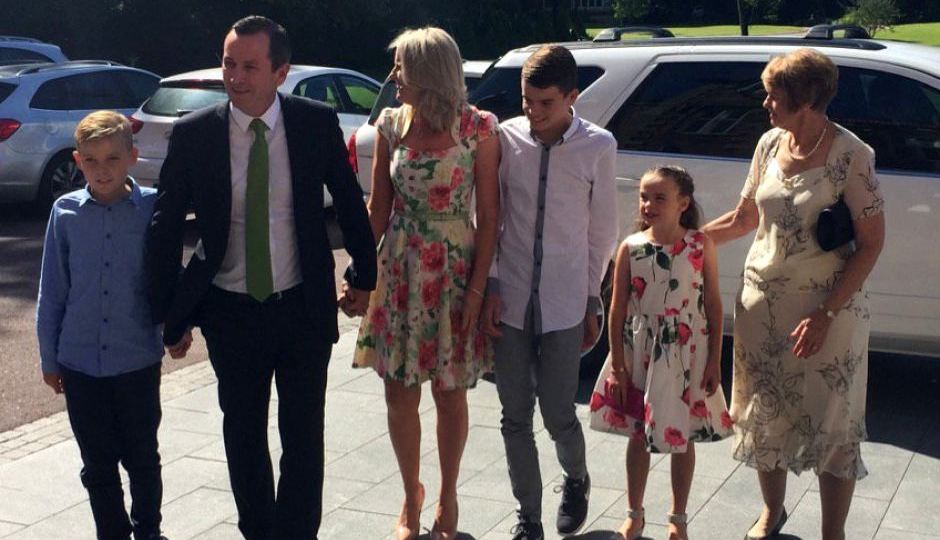 Mr McGowan brought his family, including his wife Sarah and their three children, to the ceremony. Photo: ABC

Mr McGowan and his 16 ministers were sworn in at a ceremony at Government House this morning.

The new Premier identified creating jobs and addressing the state’s financial woes as key priorities for his administration, saying his team was keen to get down to work.

The swearing in has also formally marked the end of Colin Barnett’s time in office, bringing to a close eight-and-a-half years of Liberal-National alliance government.

Mr McGowan announced the distribution of portfolios yesterday, with most of his MPs continuing to work in the sector they focused on in opposition.

The key changes are Fran Logan picking up Emergency and Corrective Services, Alannah MacTiernan becoming Minister for Agriculture and Regional Development, Paul Papalia getting Racing and Gaming and Bill Johnston being allocated Housing.

Labor now holds 41 seats of the 59 in the Legislative Assembly, after claiming victory in Joondalup yesterday.

The only Lower House seat still in doubt is Kalgoorlie, which is expected to go to the Liberal candidate Kyran O’Donnell.

The Upper House outcome is less certain, although it is possible Labor will pick up 16 seats and only need the support of the Greens to pass legislation.