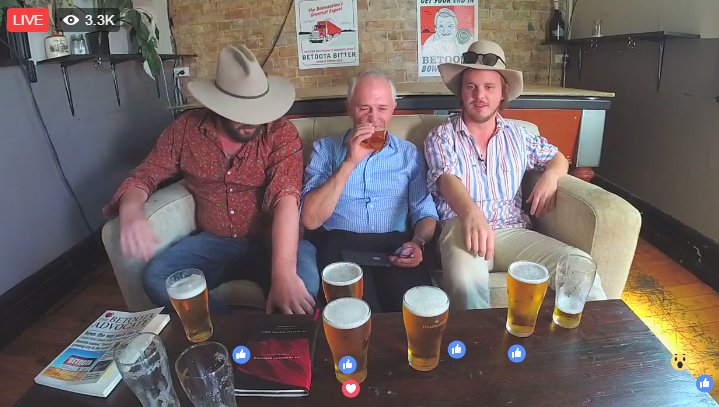 While the WA Liberals braced for defeat, the PM was in Sydney talking with a satirical news website. Photo: Betoota Advocate

Federal Opposition leader Bill Shorten was on hand in the West to celebrate Labor’s sweeping victory in the state poll — a triumph that will put further pressure on beleaguered Prime Minister Malcolm Turnbull.

Unlike the opposition leader, Turnbull made only a single visit to the state during the campaign, with some reports insisting local Liberals saw his declining personal popularity as a handbrake on their uphill battle to retain power.

As Shorten dashed from photo op to photo op at Perth polling booths yesterday, Turnbull was downing beers in Sydney with the two men behind parody online news site, The Betoota Advocate.

His absence was noted by The West, whose headline sniffed that he “skipped” the state and “was nowhere to be seen.”

The crushing Labor victory — the biggest-ever swing against a sitting government in the state’s history — banished Shorten’s earlier anger over what he described as Liberal scare tactics after anti-Labor text messages surfaced as Western Australians prepared to cast their votes.

The texts stated: “Fact: Household bills will go up under a Labor Government. Mark McGowan is not worth the risk.” It remains unclear who sent the texts, marked as ‘LaborRisk’, but that did not stop Mr Shorten pointing the finger at the Liberal Party.

“I wonder if Malcolm Turnbull will have a tantrum about these text messages,” Mr Shorten told reporters in Perth at a joint appearance state labor leader Mark McGowan.

“They’re not above using the very tactics they criticised Labor for.”

Prime Minister Malcolm Turnbull described the campaign as “fraudulent” and unmatched in its deceit. But an Australian Federal Police investigation did not find any breach of the law.

A 48-hour blackout period is imposed on political advertising before an election with the exception of digital media. However, text messages remain a ‘grey area’.

Recipients of the ‘LaborRisk’ message have described the text as “harassment” and “spam”.

This is harrassment – SMS received FACT: Household bills will go up under a Labor Government.
Mark McGowan is not worth the risk.

FFS, another text recvd today #wapol FACT: Household bills will go up under a Labor Government.
Mark McGowan is not worth the risk.

The New Daily contacted both the WA Liberal and Labor parties for a response.

Turnbull sips a schooner as Libs go south in the West