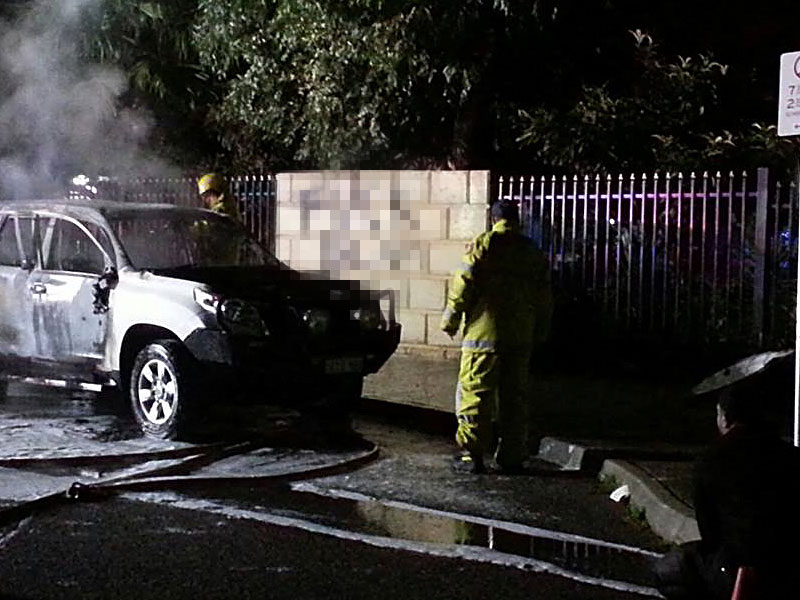 Accelerant was used to start a fire that destroyed a four-wheel drive outside a mosque in Perth’s south-east, police have confirmed.

The incident occurred at the Australian Islamic College and mosque on Tonbridge Way at Thornlie just after 8:00pm on Tuesday.

A local teacher said hundreds of worshippers were praying inside at the time of the attack, but no-one was injured.

One vehicle was gutted and four others were damaged by heat.

An offensive anti-Islam message was also painted on a wall at the site.

Australian Islamic College executive principal Abdullah Khan has told 720 ABC Perth he was shocked and disappointed by the attack but has been reassured by the support he has received.

“I had so many calls from the politicians, the state police department, from other community members last night and this morning,” he said.

“I had been on the phone almost throughout, and they have been sending messages of support and condemning this attack.

“In fact that is very heartening and it gives us the confidence that the perpetrator is not representative of peace-loving WA mainstream society.”

Mr Khan said there had been several previous incidents of graffiti, but not in about a year.

He said the school would operate as normal today.

“We have given them instructions that it is business as usual and children should come to school as they do every single day,” he said.

“In fact the people who were praying last night, they came out obviously when they heard this but after some time when they saw that emergency services and police were there, they went back into the mosque and they continued their prayer.

“That’s the message that we want to send to those people that we will not become part of supporting their agenda.

“It’s business as usual, we will continue as everyday life as usual, so that’s the message.”

A local resident, John, said he and his cousin heard the explosion and went to investigate.

“There was a white four-wheel drive on fire and we just thought, just hoped there wasn’t anyone in there, which there wasn’t, thank goodness,” he said.

“And on the wall, [there was] graffiti on the wall stating a racist remark towards a religious group.”

He said they saw three people running down an alleyway towards Spencer Road.

Police have asked anyone with any information to contact Crime Stoppers.